Jasmin Werner's work often explores architectures of power and objects of status. In her practice, she draws attention to the desire to align oneself with nature and a pre-modern past, while occupying spaces of production and consumption. According to Werners iconology, one could also argue that the structural moments of our shared reality will necessarily remain within a repetitive continuum of time.

17,000 years ago, a number of holes were made in the walls of the caves of Lascaux, in the South of France. Branches were stuck in the holes, serving as stable horizontal beams. Vertical beams were then attached, creating a structure that gave access to the ceiling. This is how the Lascaux caves were painted. The ancient Greeks built scaffolds to make statues, larger than life. In the Altes Museum in Berlin there is a drinking cup from the early 5th century BC. The ‘Berlin Foundry Cup’ is painted all around with images of an ancient Greek foundry. Sculptors work on one of the statues, standing on a wooden scaffold. We use metal scaffolds to construct our buildings. They were developed by two English brothers called Daniel and David Jones. In 1913, they built a scaffold around Buckingham Palace using their patented system, ‘Rapid Scaffixers’, to fit the metal tubes together. Their scaffolding promised change, promised progress, and stood in the way of an unobstructed view on development. There’s no such history written of safety mesh, the netting that contemporary scaffolds are often wrapped in. Façades are wrapped in scaffolds are wrapped in mesh. The veils that shroud the work of construction in mystery. Mesh tries to cancel the scaffold’s promise, to make it disappear before the work is even done. All it wants us to have is the grand reveal. It renders almost invisible and harmless the messiness of construction. Almost. Mesh is not transparent, but it’s also not opaque. It’s a web that places itself between us and an object and makes us look at both, simultaneously. We see the building behind the scaffold’s sharp lines through the mesh; the veil and its objects becoming one.

In the late 19th century, widows concealed their faces behind a mesh called ‘Courtauld crape’, named after its main manufacturer: Courtaulds from England. Crape was a matte gauze made of waste silk, crimped with heated rollers, then dyed black and stiffened with starch or glue. Strict mourning etiquette forbade all colors but black and dictated widows to wear crape veils over their faces whenever in public, for up to four years after their husbands had passed away. For the prescribed duration of the process of mourning, the widow had no choice but to present herself to the outside world as a colorless image reminiscent of the past. Like a classical façade against a rapidly modernizing backdrop, she stood out from her surroundings, performing an apparent nostalgia for times since gone. Some women called crape ‘a veritable instrument of torture’ because, apart from this emotional labor, it was costly, kind of heavy and unpleasant. It caused irritation to the eyes and skin and stained the face when wet or damp.

“Many a woman has been laid in her coffin by the wearing of crape,” a doctor wrote by the end of the 19th century. It’s true that inhaling its poisonous particles was known to have caused death. But despite all this, the obscuring mesh supposedly served a noble cause: to protect the widow against “the untimely gayety of a passing stranger.” Like the veil protecting the widow, mesh protects building and builders from the gaze of the outside world. And yet it seems made rather for that outside world, protecting it from falling rubble, and substituting the view on reconstruction with a promise of the reconstructed. As if that passing stranger couldn’t already recognize the widow, behind that blackest of black surfaces. What if the veil actually served to protect the outside world from the widow? We enjoy the stability and permanence of nostalgic façades, not the instability of the ruins behind them. Mourning makes us uncomfortable, we prefer not to see the widow’s grief. But what if we invert the gaze and look back at the world? What did she see through the mesh?

“What a dark, ugly thing it is!” said Amy, unfolding and throwing it over her head; “how dismal it must be to see the world through such a veil as this!”

“And yet till one has seen the world through a veil like that, one has never truly lived,” said another voice, joining in the conversation.

from ‘The Mourning Veil’ by Harriet Beecher Stowe 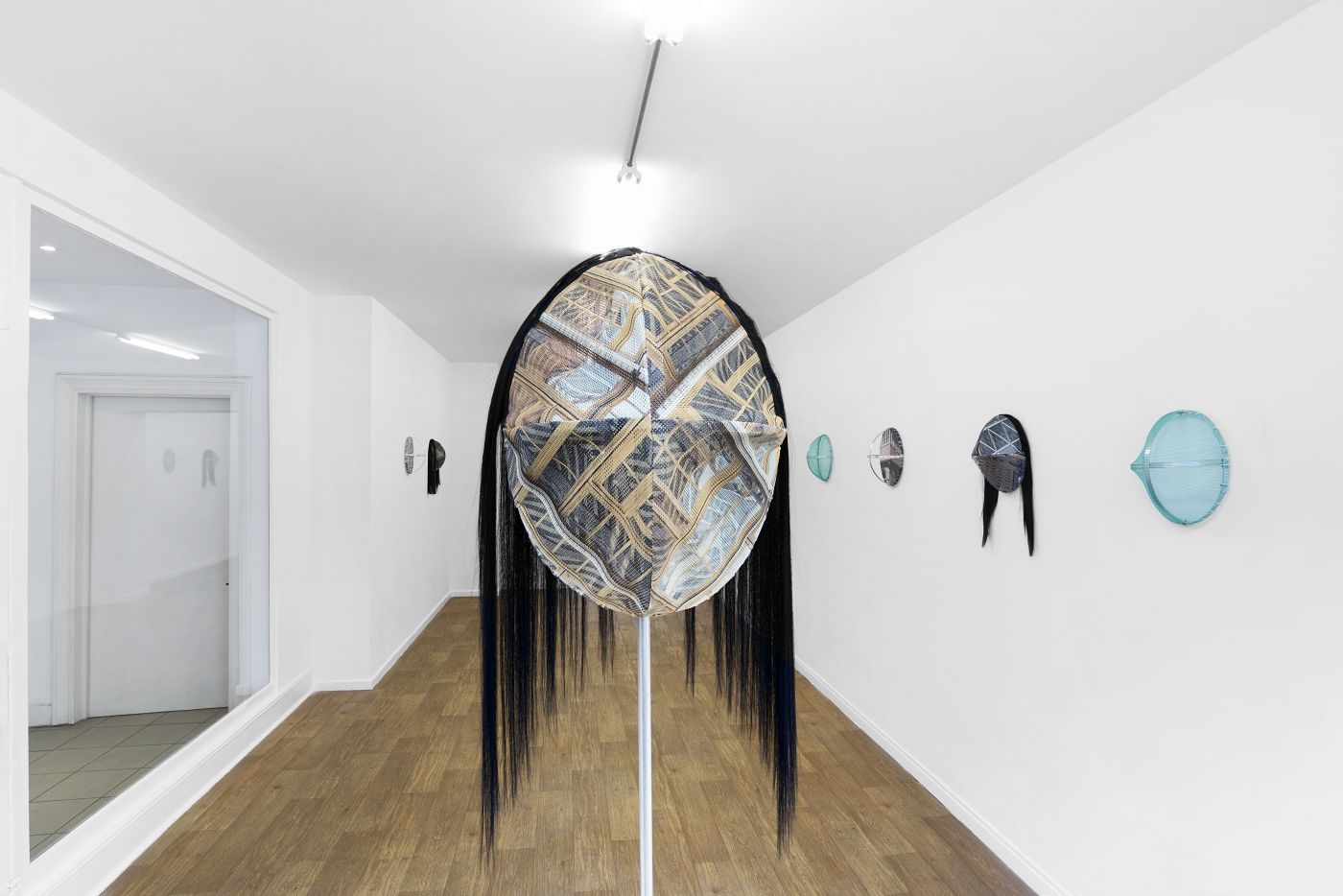 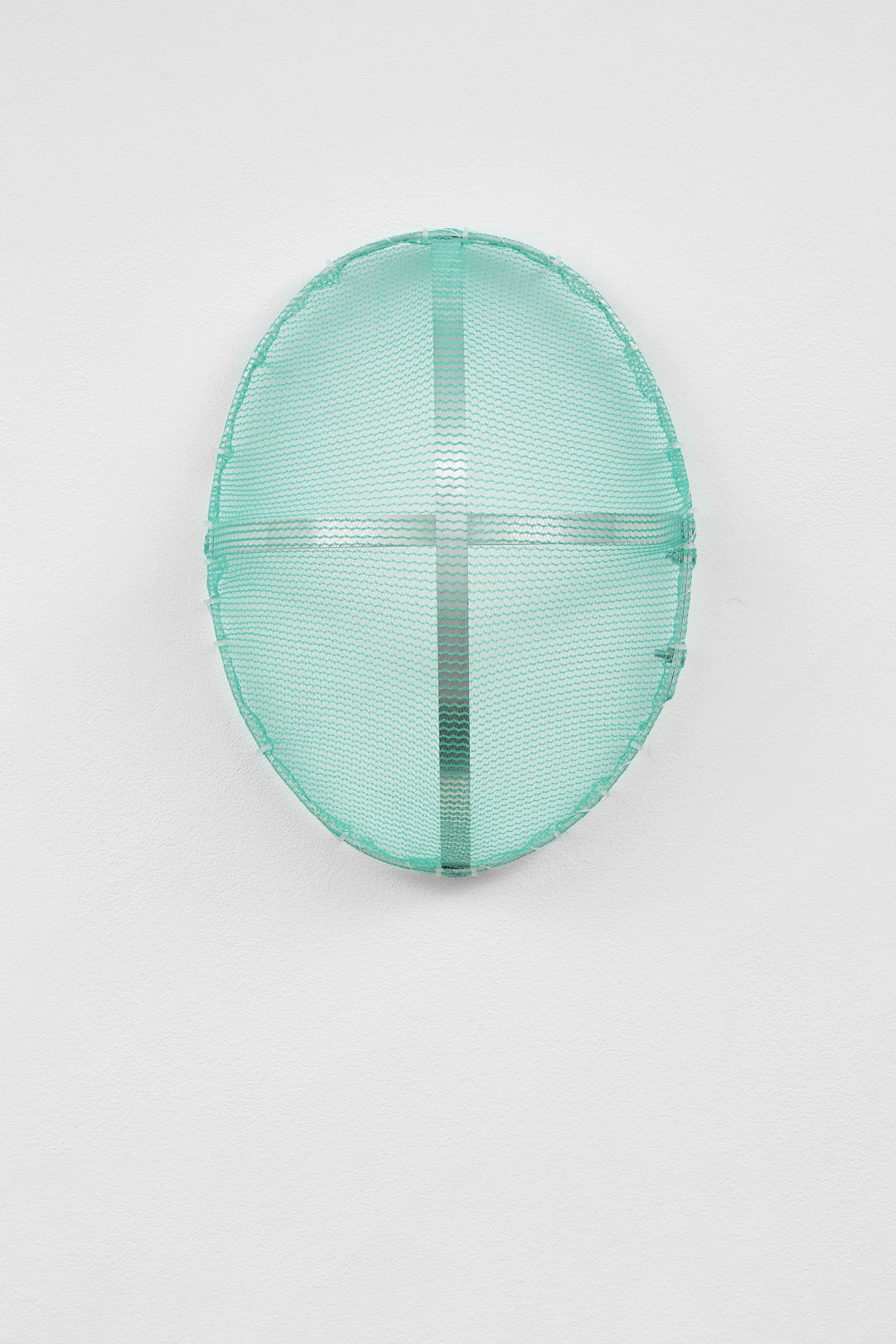 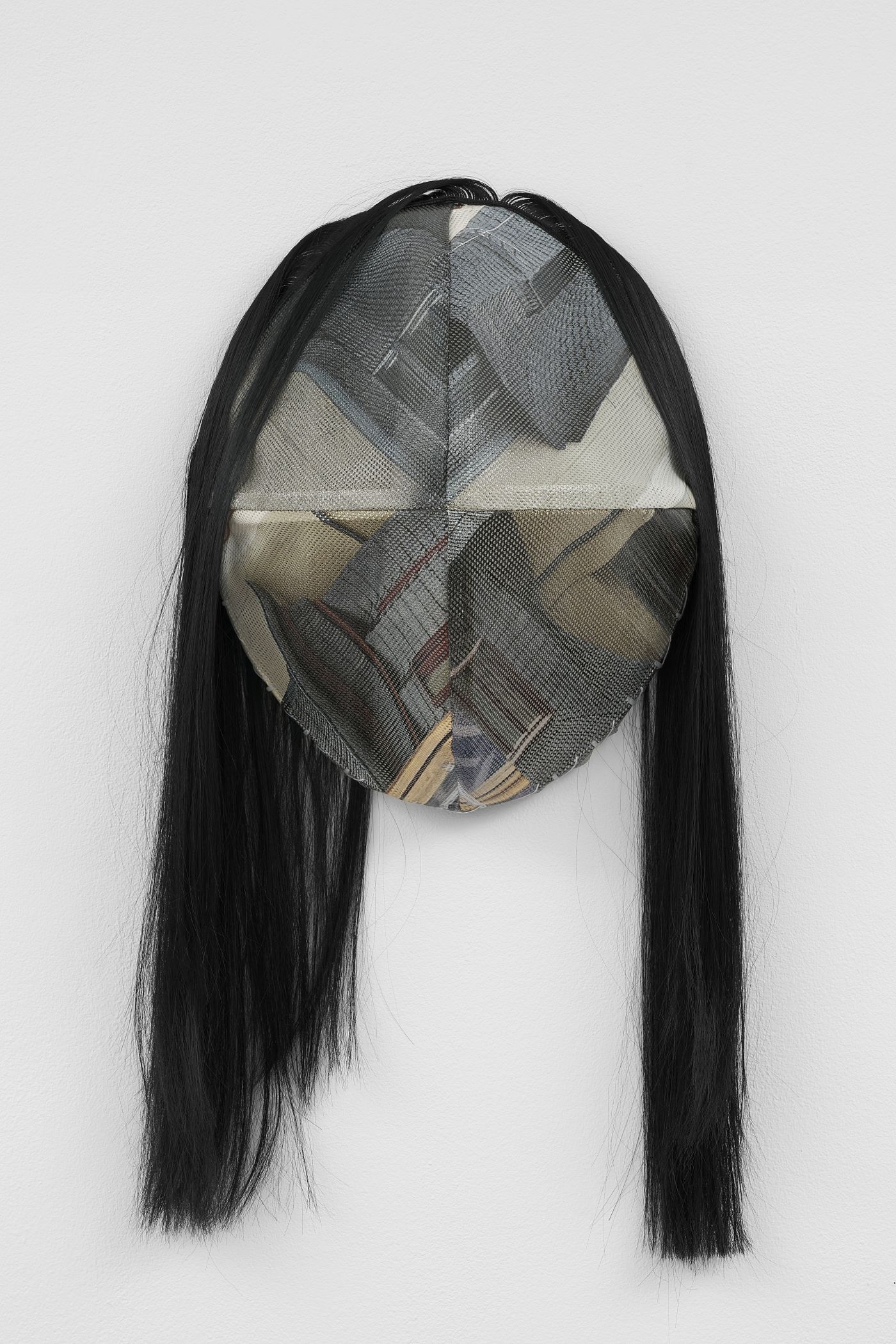 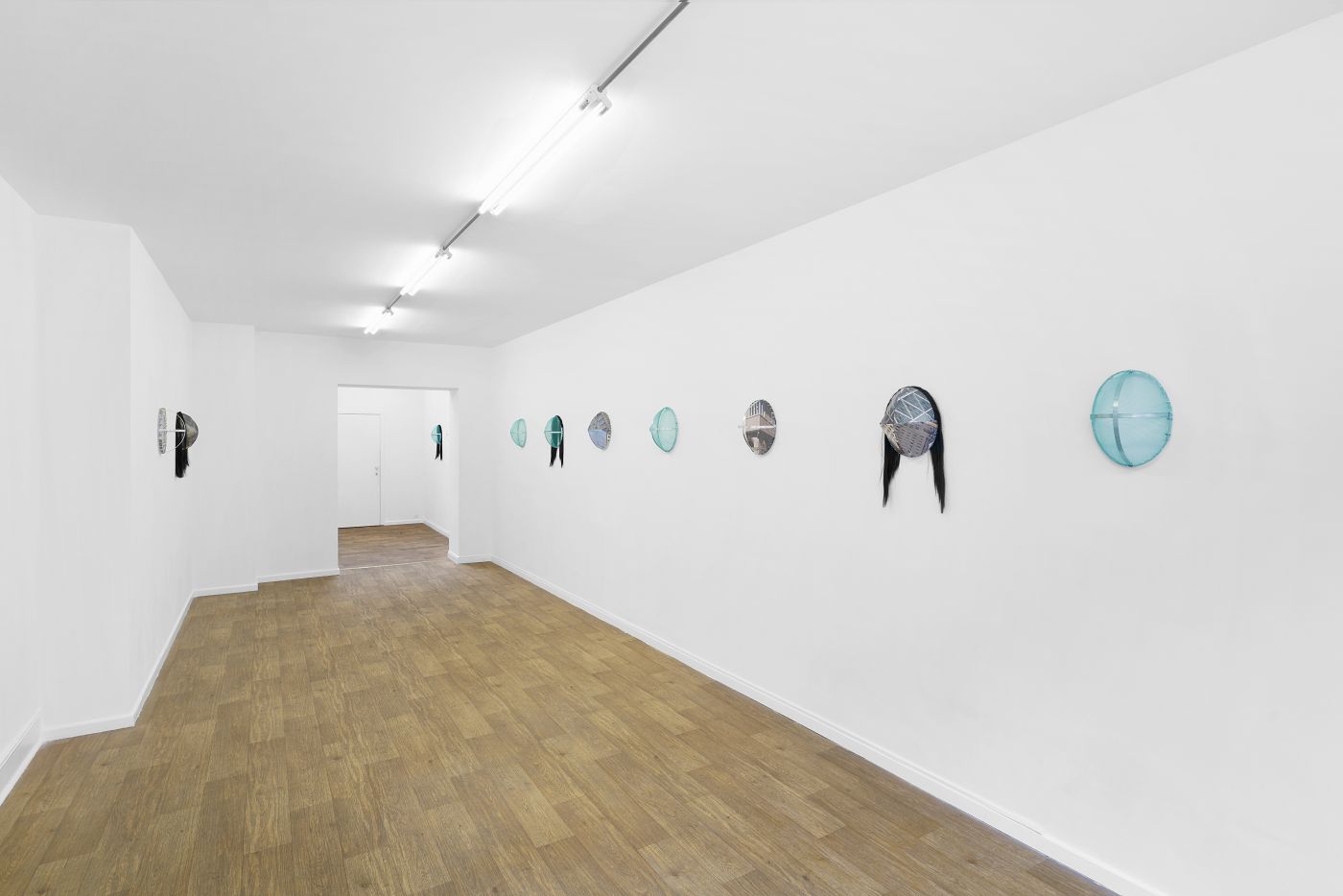 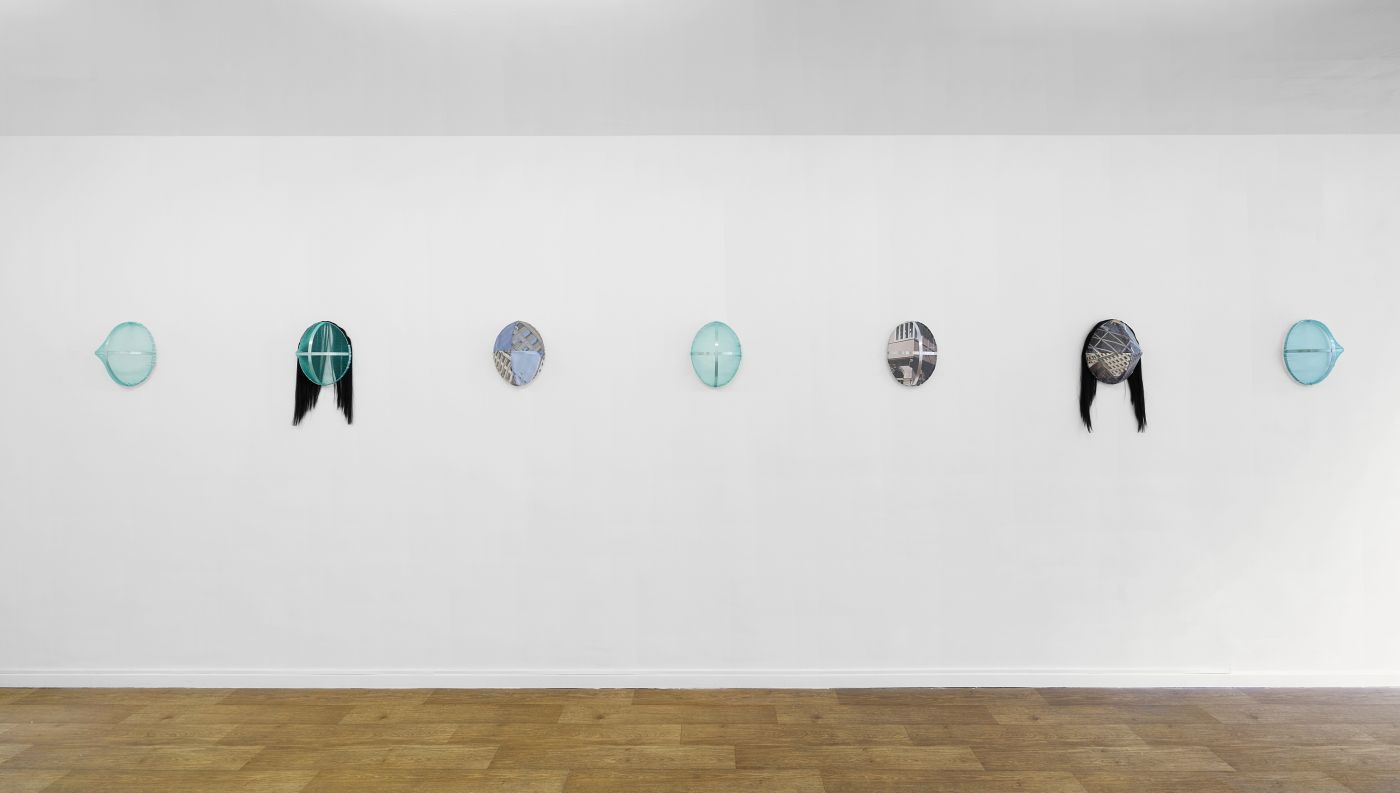 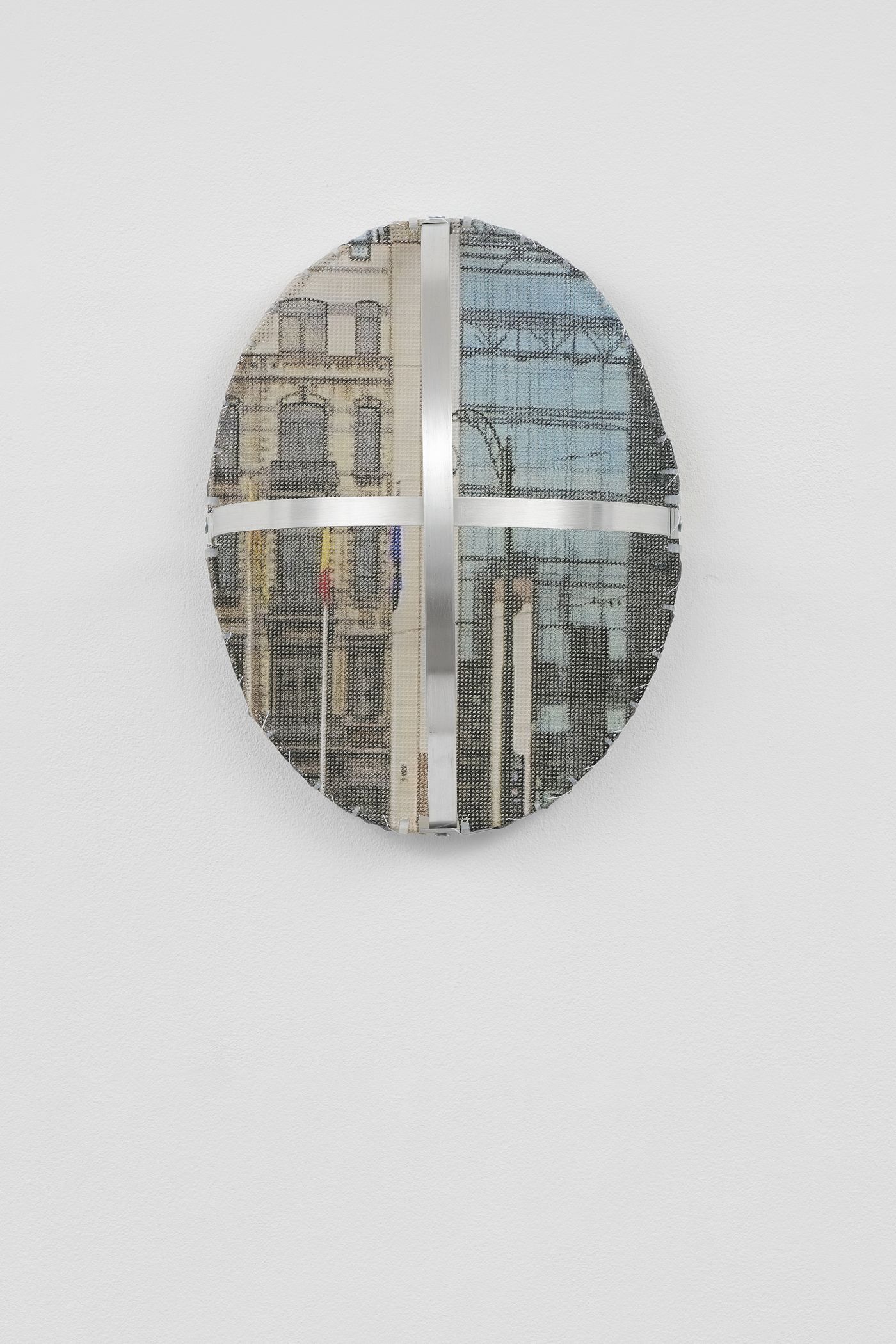 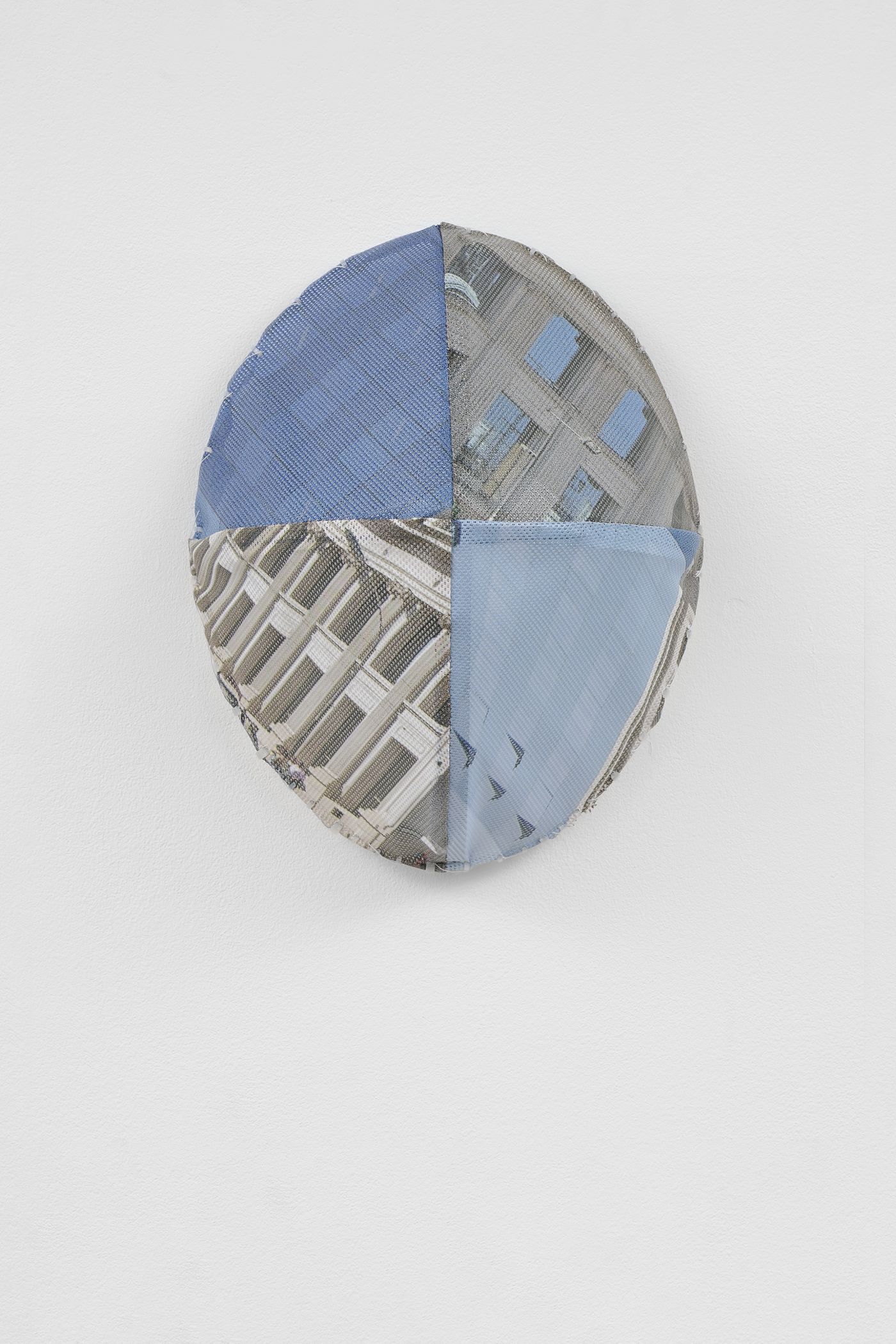 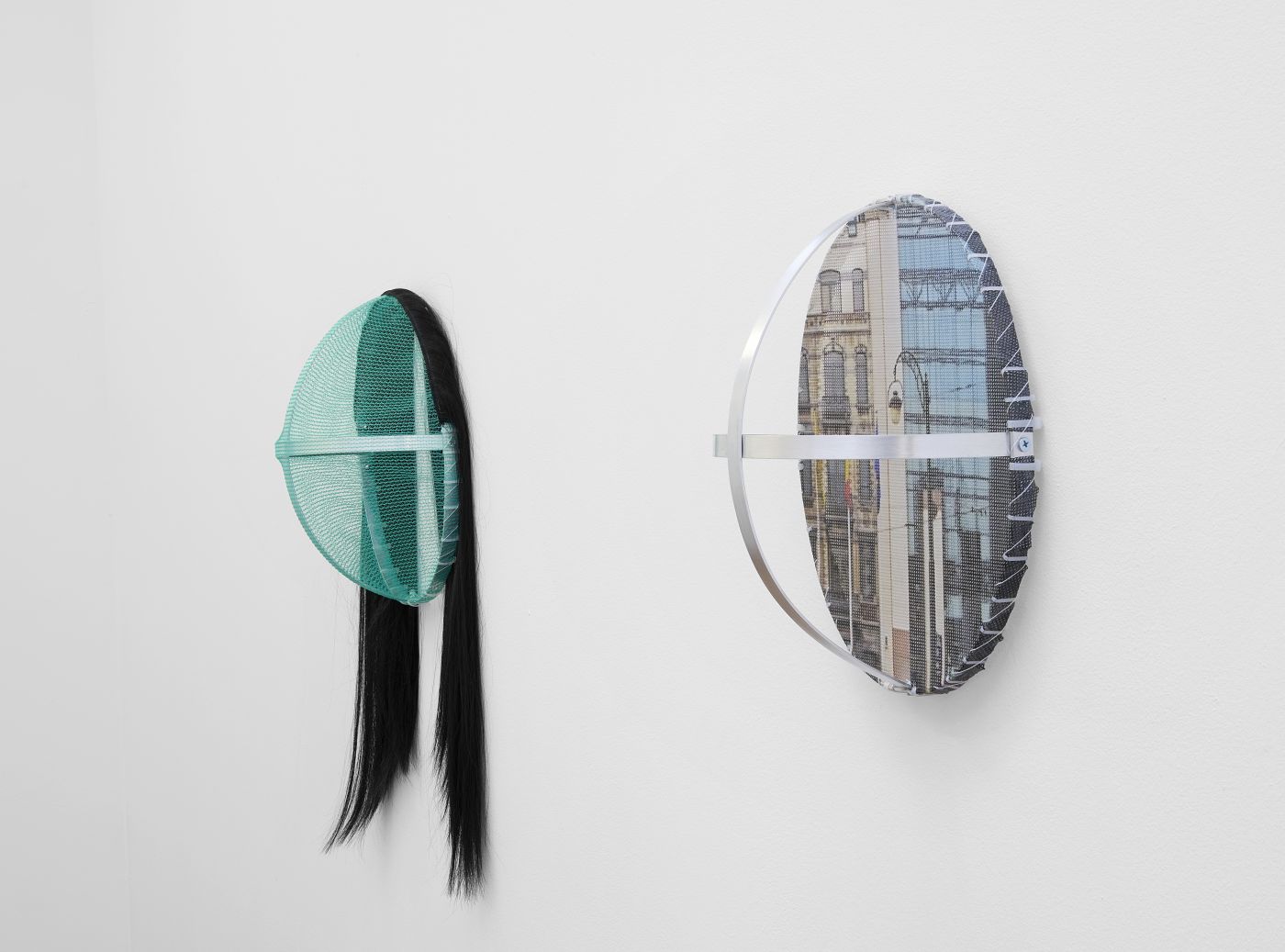 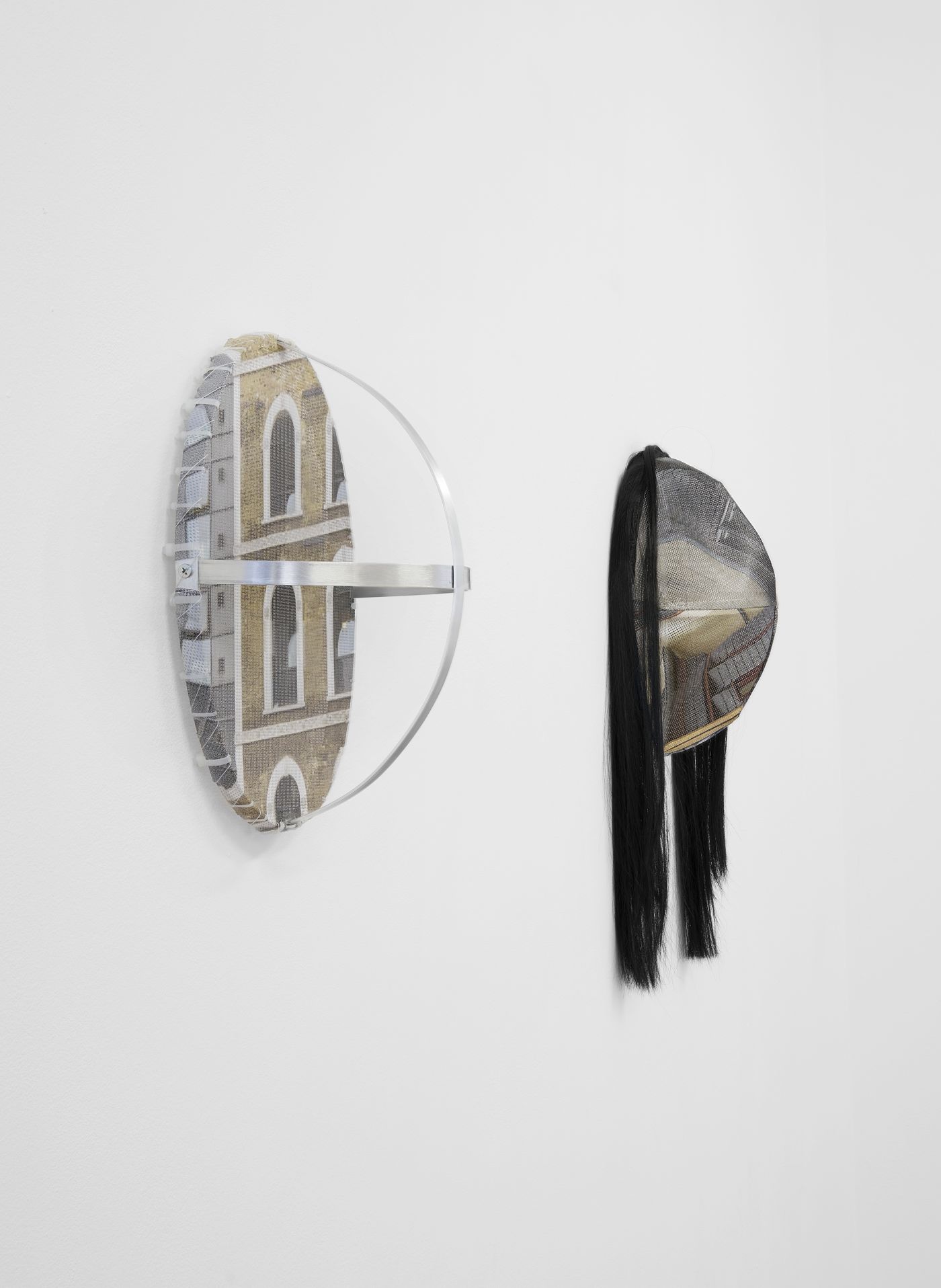 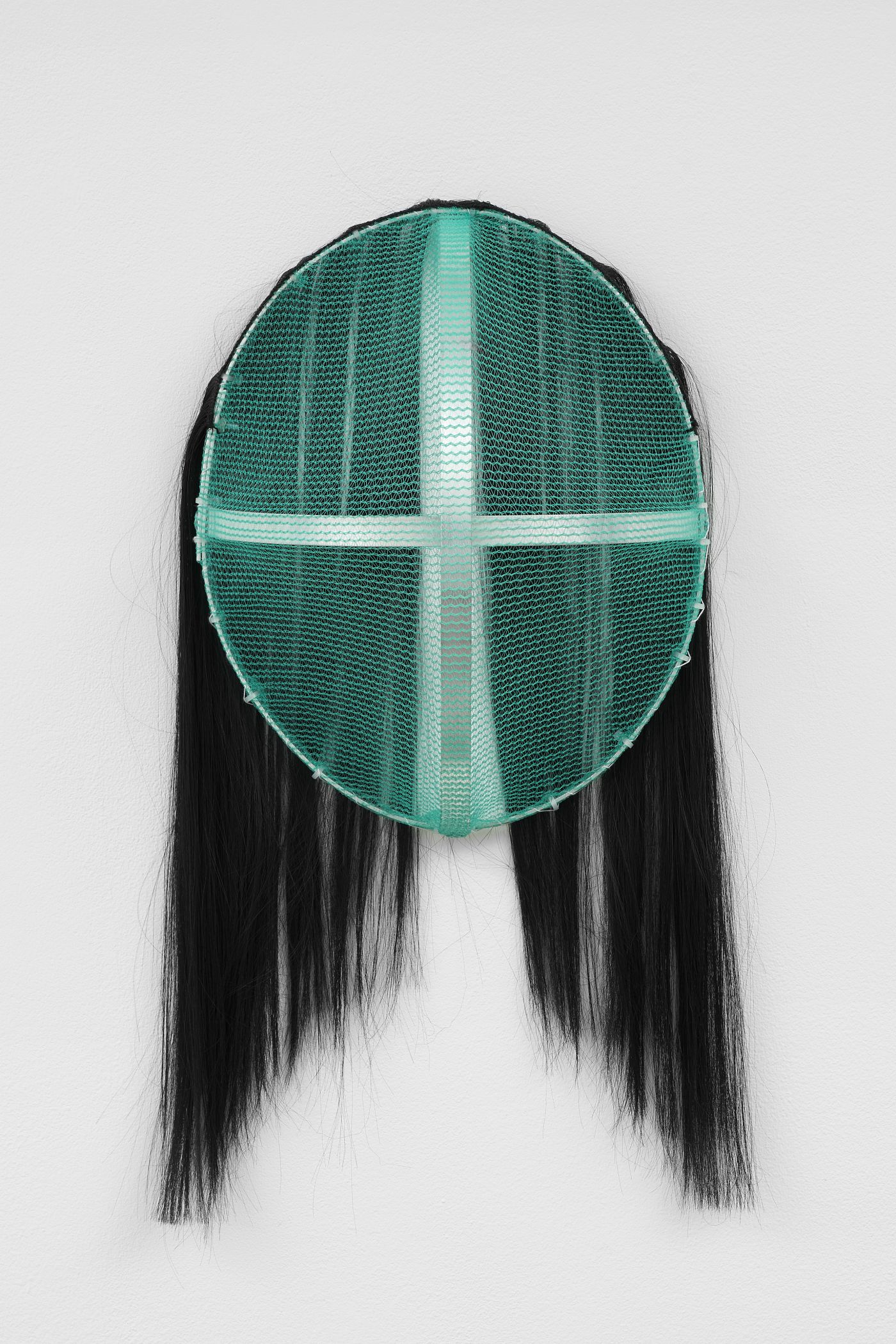 Jasmin Werner is a German-Filipino artist living and working in Cologne and Berlin. In her practice she investigates historical analysis, ideologies and individual desire by creating her own system of reference and combining different cultures and epochs non-hierarchical. Her sculptures explore a perception of economical, social and spiritual development based on constant growth. By this, Werner questions the modern concept of productivity with an emphasis on its gender-specificities. Jasmin studied at HfG Karlsruhe, Rietveld Academy Amsterdam and Städelschule Frankfurt and has since participated in ...