The artist’s practice is informed by the interest in the “skin” of objects and in the different modes of perception and understanding of the work. Through the use of Jacquard-weaved textiles, the artist investigates the role and the meaning of texture. By creating microscopic reliefs of different scales and dimensions, namely woven drawings, her intent is to access a space simultaneously with a painting and a sculpture while tearing them both from their immobility. Textile is also employed in the realization of ceramic, bronze and cast-iron sculptures. These works are the results of an experimental p ... Somersaults, 2021, similarly to the earlier work W0934.A, 2018, is composed of traces of human bodies. Their profiles, first registered on canvas, are the drawings on which the textile composition is based. The viewers are invited to confront themselves with a choreographed inventory of bodies, depicted in the act of falling and raising, slightly bigger than life. Thanks to the jacquard weaving technique, Margherita Raso initiates a dimensional and material transfer, where the image and the object penetrate each other and become a sculptural composition. The drawing is not imposed o ... The sculpture’s texture comes from the front and back of one of Margherita Raso’s jacquard fabric works, casted into the ghostly shape of a body. Through a process that stresses the boundaries of the traditional lost-wax casting technique, the textile gets sacrificed and its texture remains impressed onto the metal surface. In an irreversible narrative of shapes and materials oscillating between different statuses, the work reflects the vulnerability of a body. 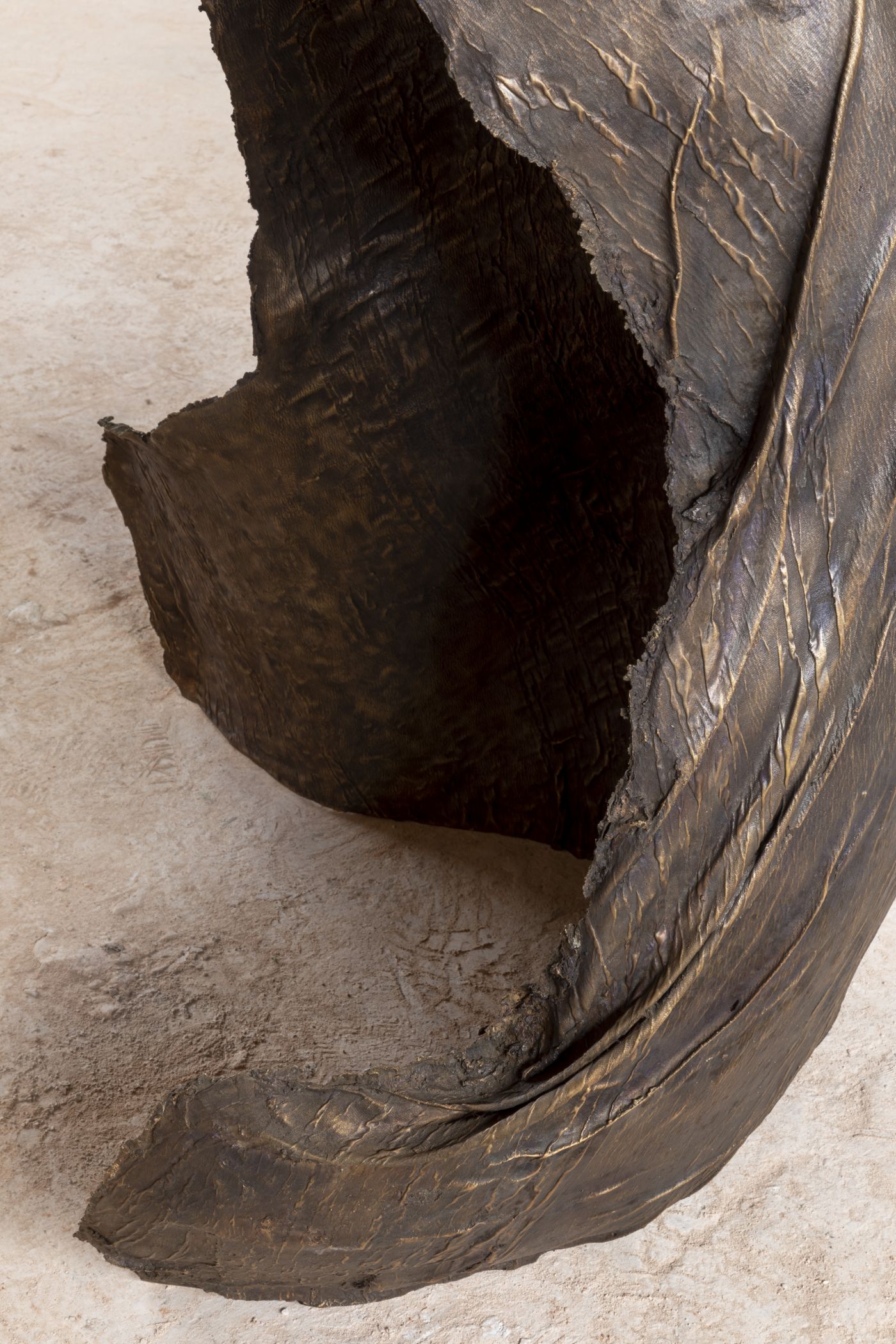 The space-time of the tear-off, in which different materials touch each other, participates in Raso's investigation of those techniques and technologies which, like the jacquard loom, are able to create reliefs without adding or removing matter, instead making them lose or acquire qualities. The honey-colored pattern on a white background, which belongs to [a] series of abstract compositions [...], was the first body that underwent a double translation: firstly, it lost its digital skin to acquire a jacquard one (Untitled, 2016) and, secondly, it exists now as if hallmarked in the wrinkles of its bronze skin. […] [To realise the latter,] Raso built a template structure and placed the fabric on it, which was then covered with a layer of crushed bricks, plaster and water, and transformed into a mold. The artist tore off the front of the fabric and glued its back where the pattern got imprinted, in order to then proceed with the lost wax technique. The spectral result, reminiscent of a breastplate or the back of an armor while twisting, corresponds to the bronze that came into contact with the cavity left by the loss of wax and fabric during its firing. Sensitive to the touch, the surfaces that remain impressed there incorporate not only the current reliefs but also their appearance prior to the event, describing the experience molecule by molecule. This is the interpenetration that lies at the heart of Margherita Raso's work: the incompatible manifestation of the material process in its final image. Lentezza No. 1, 2021 belongs to a group of works developed by the artist in the past two years, and presented in her most recent solo exhibition “Casting The Tempo”, curated by Paola Nicolin at Santa Maria in Lucedio Abbey, Vercelli (IT) and produced by APTITUDEforthearts. Here, the body abstracts itself into color and light, resulting in the encounter of red and blue threads—two colors conventionally used to visualise the two extremes of temperature. Raso’s long-standing attention to how bodies interact was applied to Vercelli’s rural landscape, and developed through an in-depth research o ... Montez Press Radio as Tongue and Cheek - Ep28: Looms of Sound with Margherita Raso and Kali Malone interviewed by Emma McCormick-Goodhart recorded live on May 29th 2021 at 12th-century Lucedio Abbey, Italy, where Raso and Malone collaborated on a sound installation on the occasion of Raso’s exhibition “Casting the Tempo”. A certain kind of beauty resides in the ability of some objects to initiate a reflexive consideration of our perceptual experience. These objects stimulate the awareness of our physical and sensory capacity. In the reconciliation with our limits, we suddenly become conscious of our body’s perimeter.

Another type of beauty derives from the sudden encounter of two bodies in the middle ground. In the acts of their precarious coexistence, they generate a choreography on the threshold between attraction and resistance. This dialectic movement is the unresolved blend of originality and ...