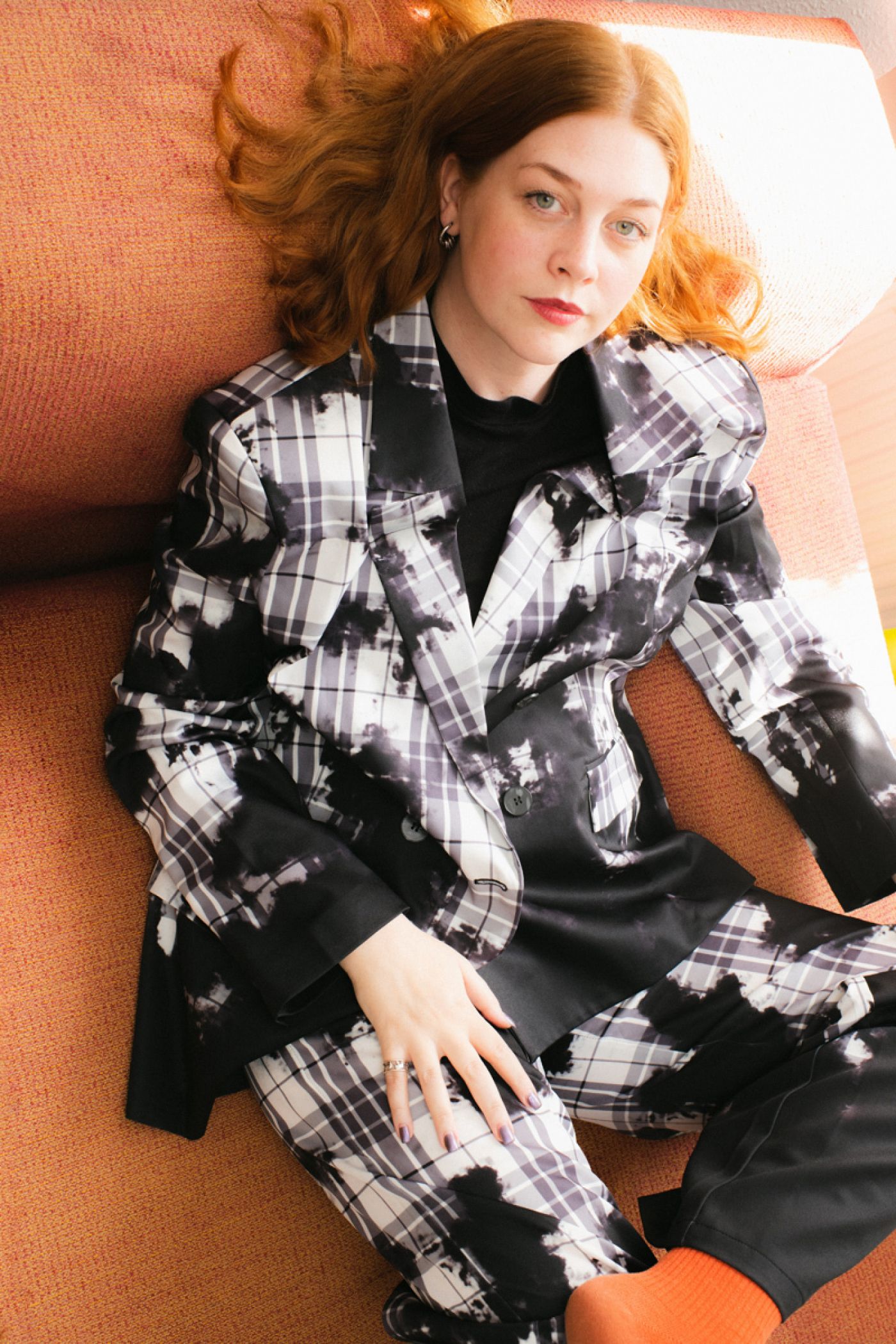 Minor affects, ambiguous visions and liminal experiences are usually the ones ignored, deemed uncompetitive and non-profitable. In the hands of the disobedient subject of late-capitalism however, they become a refuge: a way to escape the dominant structural parameters and render oneself fugitive from the norm of « achievement-subjects »*.

In her recent works, Danish Berlin-based Tanja Nis-Hansen (b. 1988) has developed a pictorial language interweaving historical references and subjective reworkings of her medium’s history: painting. Through deskilled theatrical flatness and neo-surrealist expressive deformations, psychedelic pop-cultural motives and the trope of reclining women in art, the artist explores the non-productive, non-effective body.

From earlier explorations of hypnagogic states through the exhausted, resting body and its dreaming mind, Nis-Hansen has recently turned to similarly unperformative states anxiousness, illness and grief. In her newest series for LISTE, one of her recurrent motives, the bald, non-gendered sleeper – post-human alien or hyper-vulnerable newborn? – appears gently nested amidst a whirling mountainous landscape.

* In The Burnout Society (2010), philosopher Byung-Chul Han contrasts the former « obedience-subjects » of a disciplinary world with their contemporary 21st counterparts, the inhabitants of an achievement society just as oppressive as the first one. 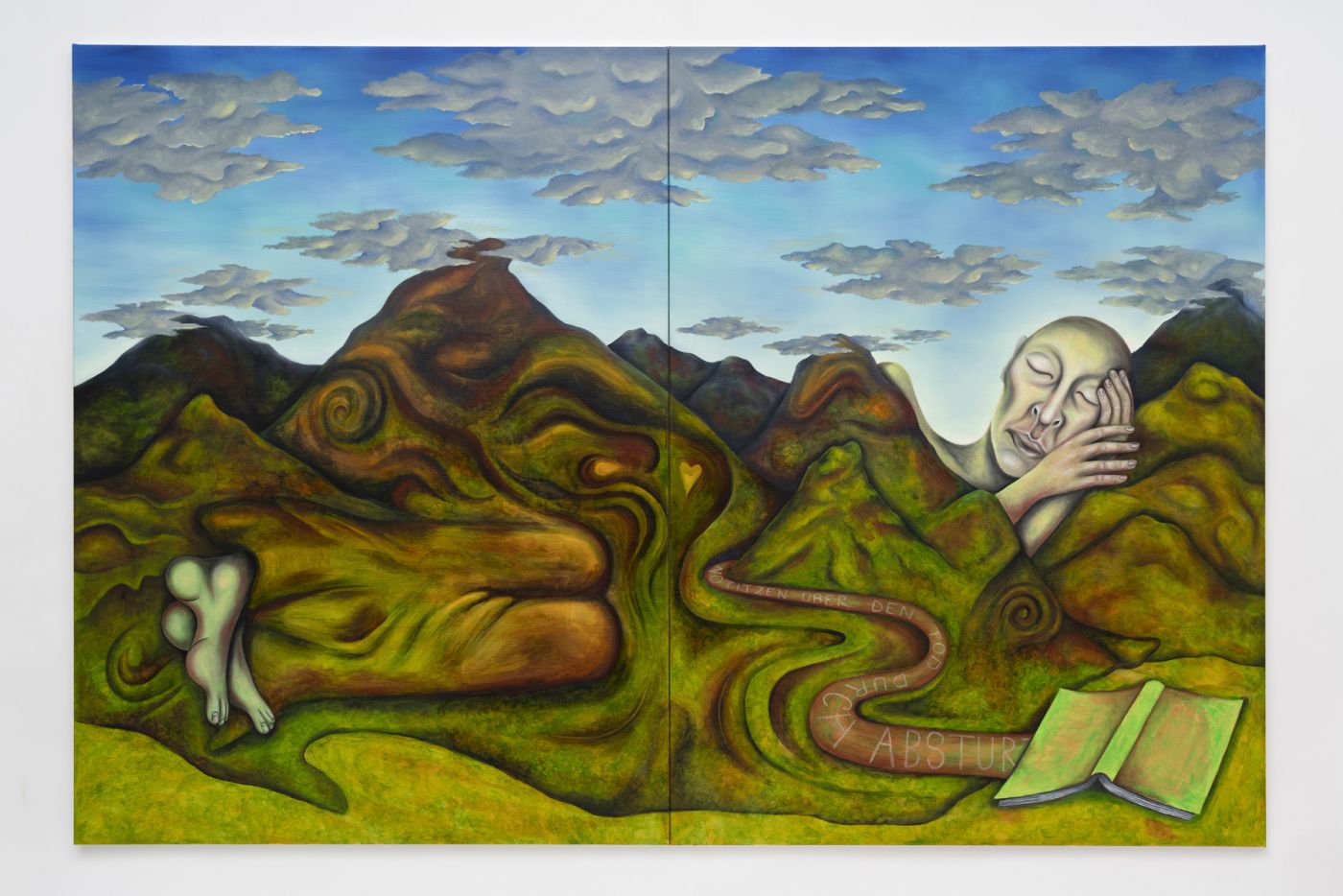 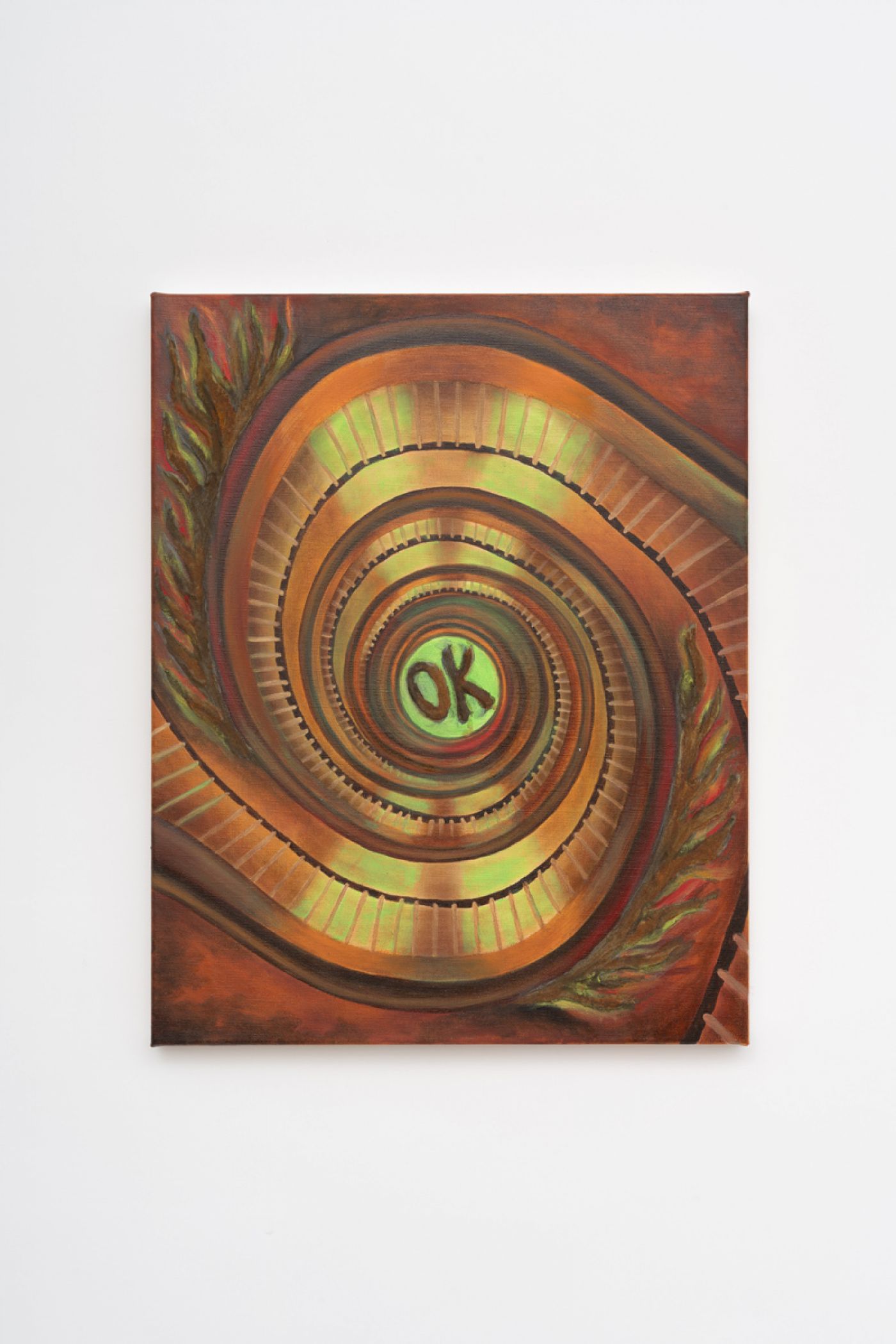 « (...) I recently began to leave the figures out of some paintings to instead see how the topics that I work with can be treated through text on the canvas or depicting an almost psychedelic architecture like that of the spiral staircase. These new works are an attempt to abstract my visual language from the flesh while still talking about the weird sensation of existing within a human body. » 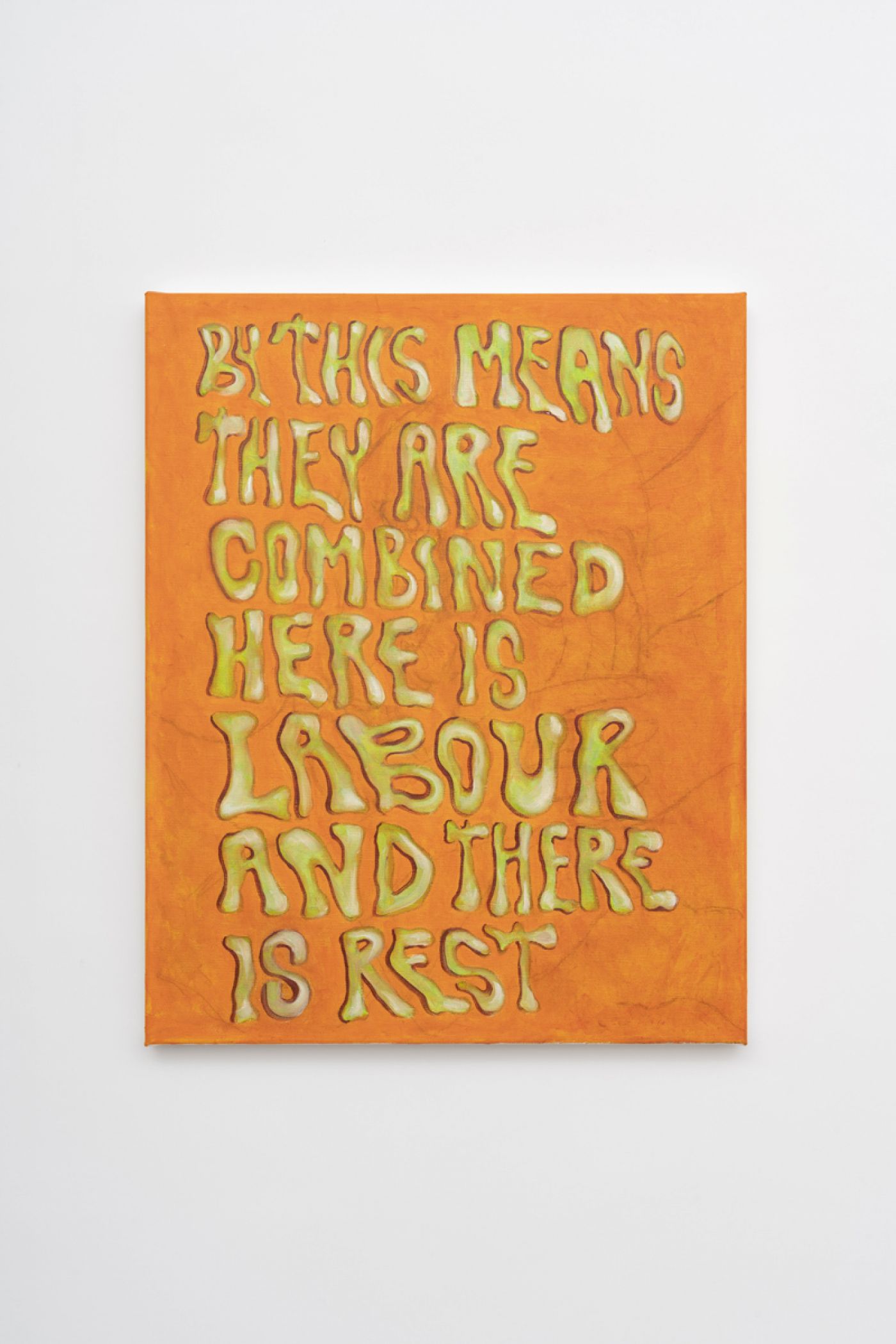 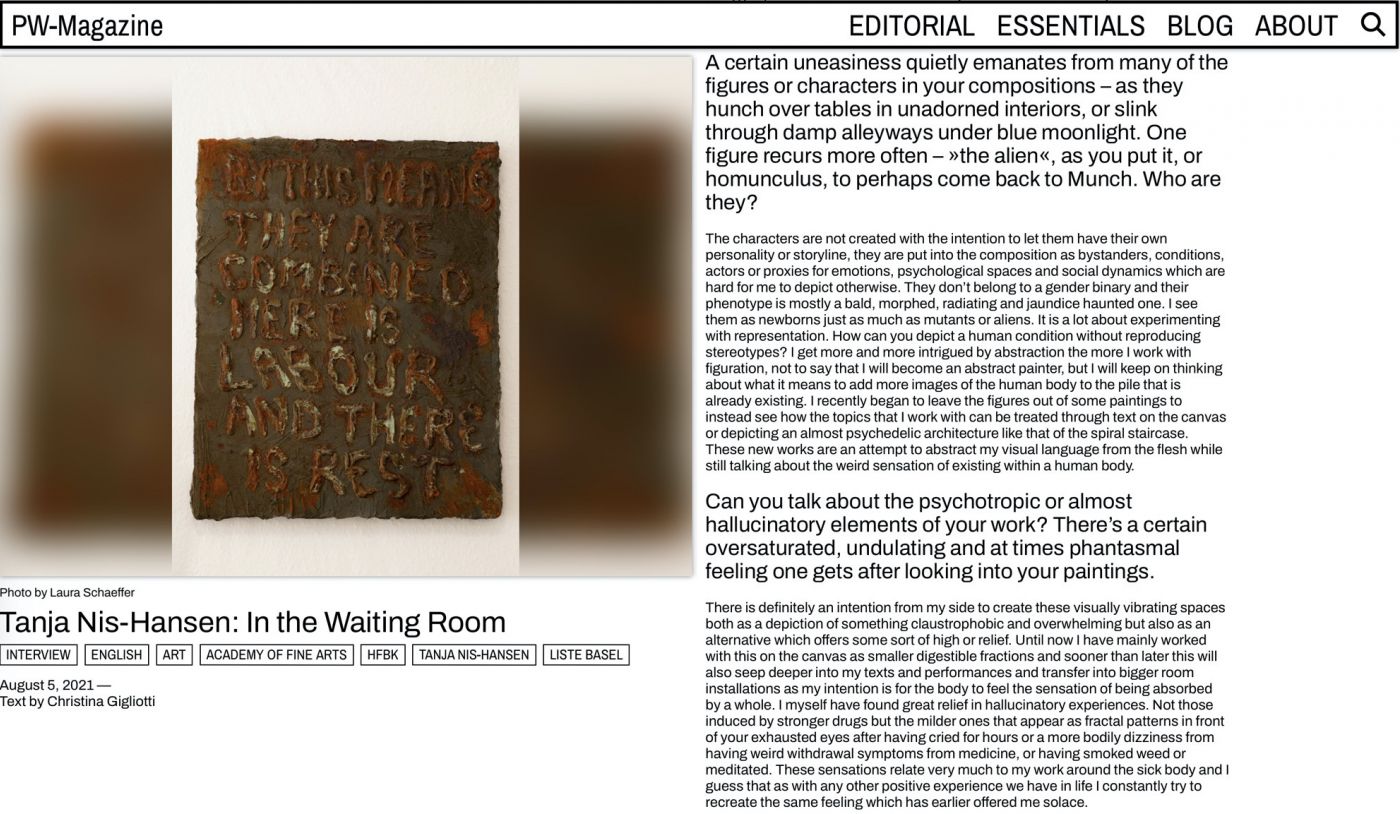 Tanja Nis-Hansen: In the Waiting Room

Interview by Christina Gigliotti for PW-Magazine 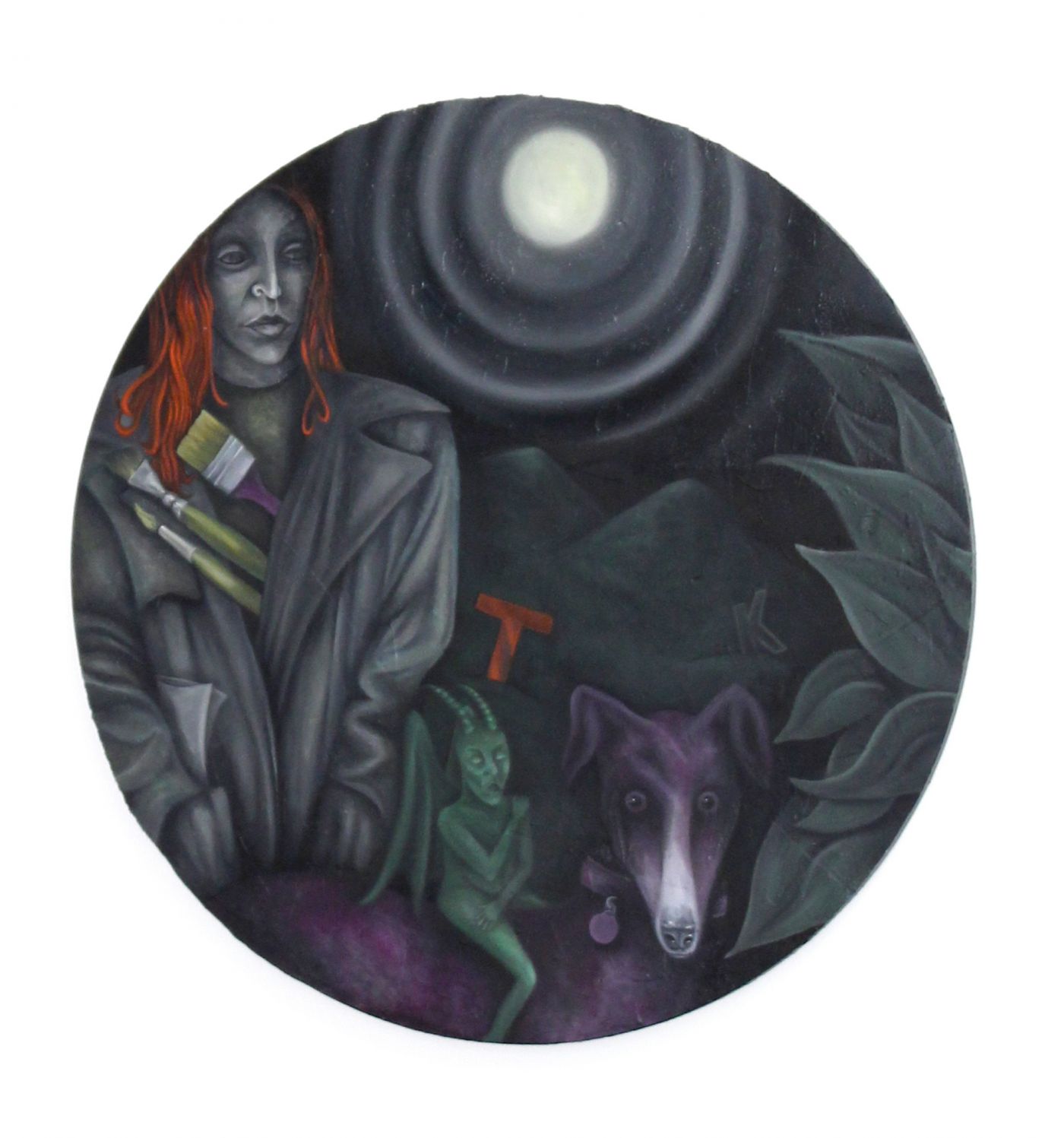 « The characters are not created with the intention to let them have their own personality or storyline, they are put into the composition as bystanders, conditions, actors or proxies for emotions, psychological spaces and social dynamics which are hard for me to depict otherwise. They don’t belong to a gender binary and their phenotype is mostly a bald, morphed, radiating and jaundice haunted one. I see them as newborns just as much as mutants or aliens. (...) » 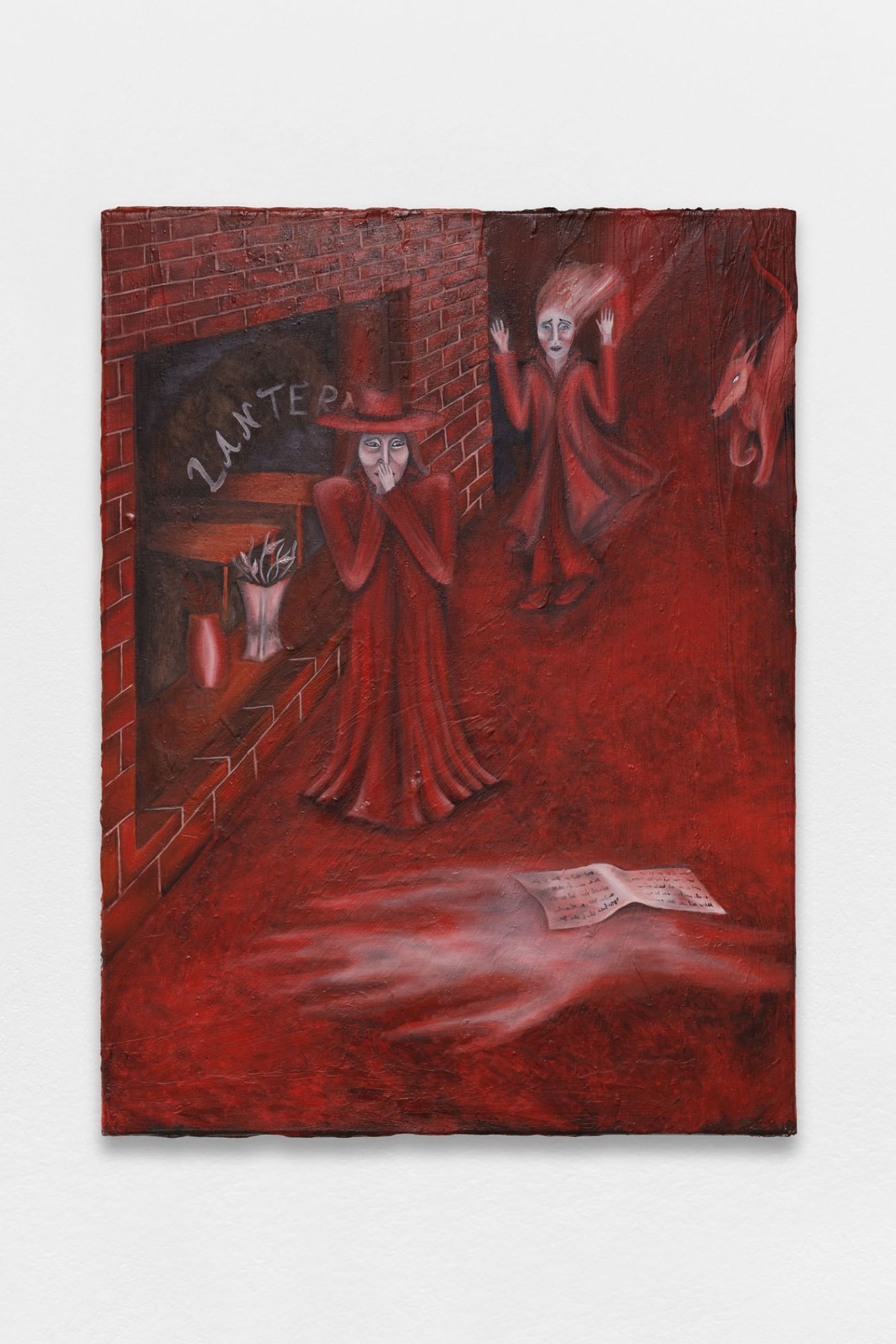 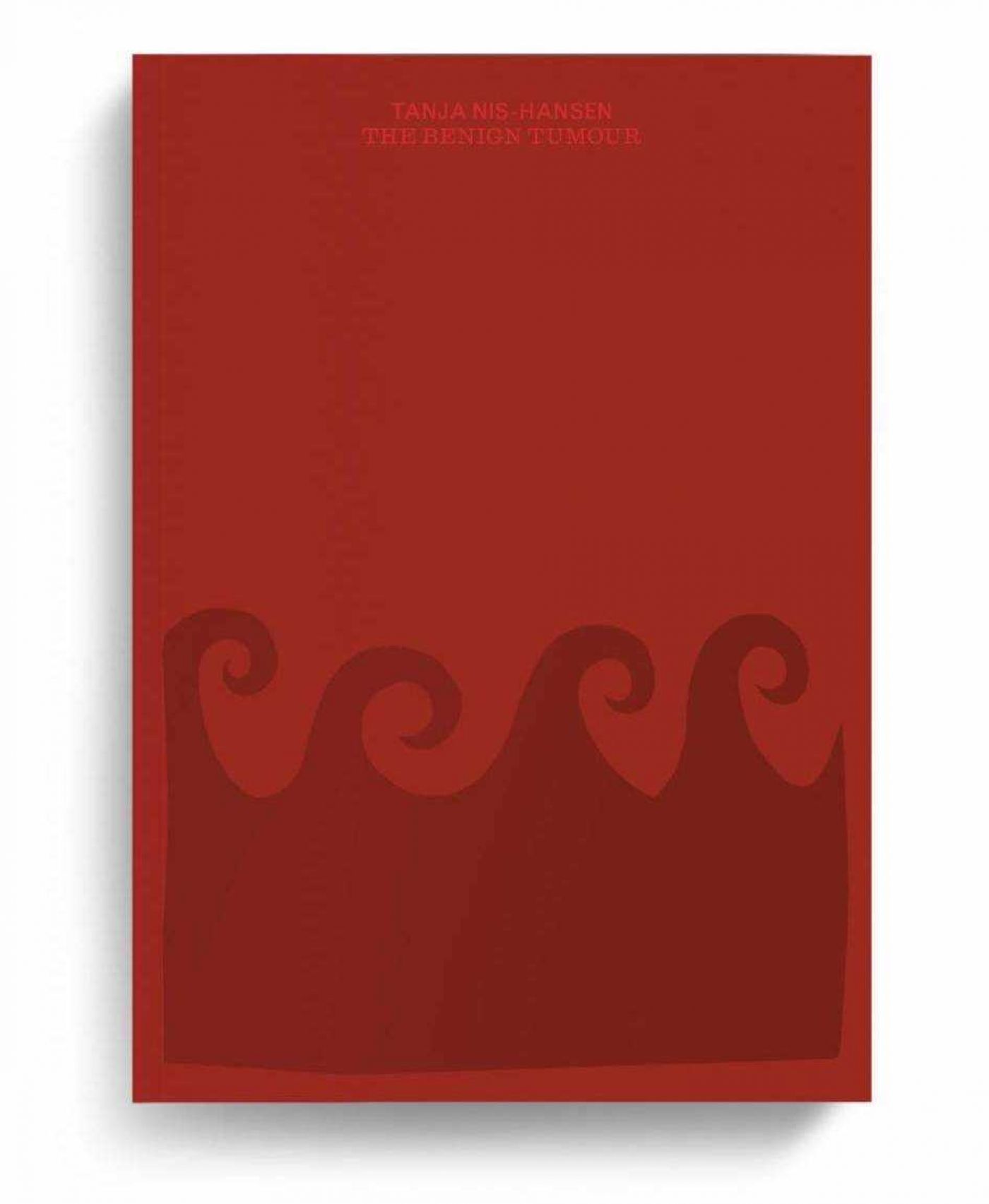 Produced with the help of the Danish Art Council, the 74-pages publication comprises texts by art-historian and curator Cathrin Mayer and writer and poet Julie Gufler, as well as an interview conducted by Eloi Boucher.
Self-published by Sans titre (2016) and designed by Charles Levai.

She studied in Copenhagen and Vienna before achieving both her BFA (2016) and MFA (2018) at the Academy of Fine Arts, Hamburg under the supervision of professor Jutta Koether. She has had solo exhibitions at Sans titre (2016), Paris and at Udstillingsstedet Sydhavn Station, Copenhagen (both in 2019); at Come Over Chez Malik’s, Hamburg (2017). Recent group exhibitions include L'INCONNUE, New York (2021); SORT, Vienna (2019); Crum Heaven, Stockholm (2019); Rumpelstiltskin, New York (2018); Kunsthaus Hamburg (2018); Galleria Federico Vavas ... 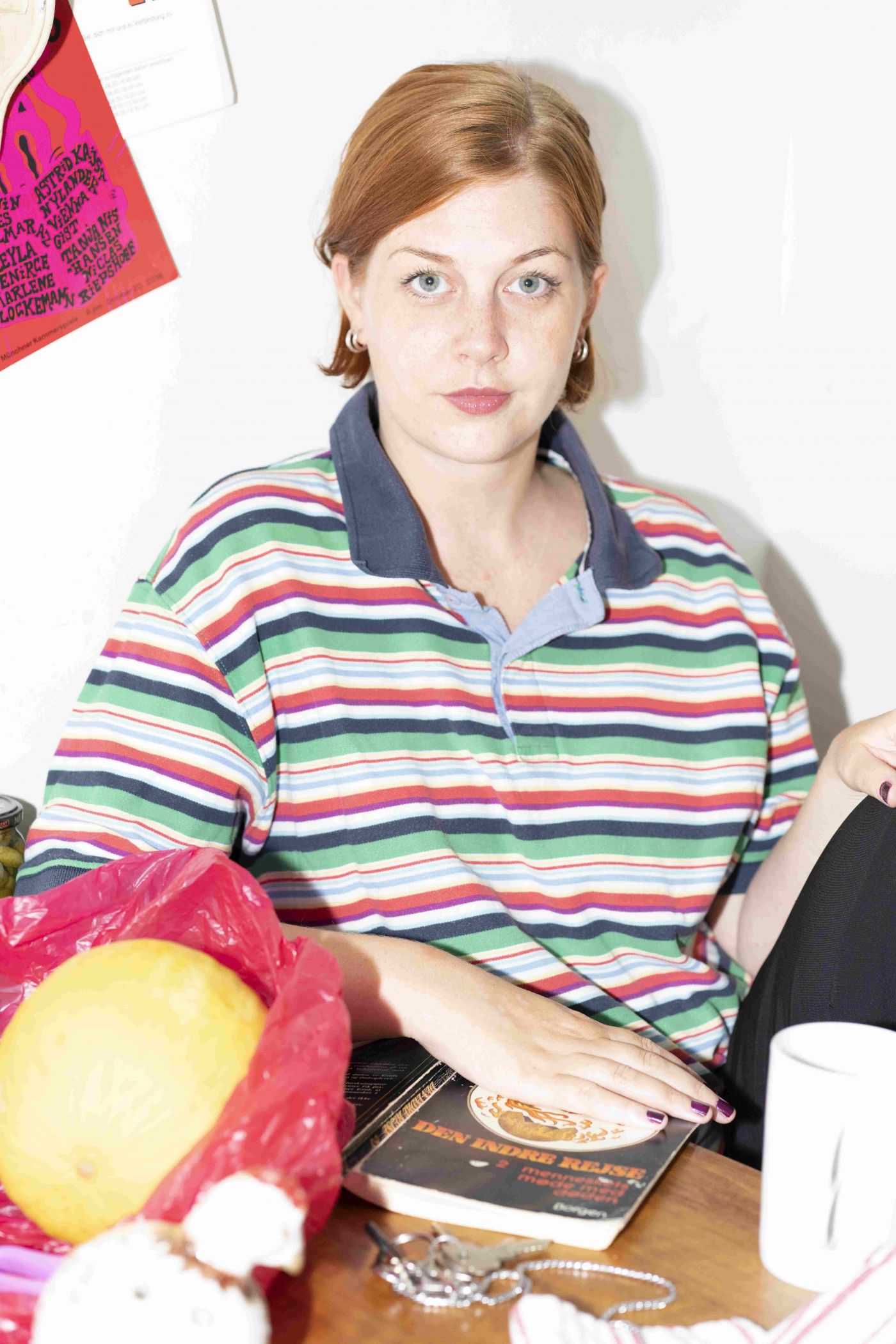 Tanja Nis-Hansen (b. 1988, DK) lives and works in Berlin. She studied in Copenhagen and Vienna before achieving both her BFA (2016) and MFA (2018) at the Academy of Fine Arts, Hamburg under the supervision of professor Jutta Koether. She has had solo exhibitions at Sans titre (2016), Paris and at Udstillingsstedet Sydhavn Station, Copenhagen (both in 2019), at Come Over chez Malik’s, Hamburg (2017). Recent group exhibitions include SORT, Vienna (2019), Crum Heaven, Stockholm (2019), Rumpelstiltskin, New York (2018), Kunsthaus Hamburg (2018), Galleria Federico Vavassori, Milan (2018), Munchener Kammerspiele, Munich (2018), Institut Kunst, Basel (2018) and Halle fur Kunst, Lüneburg (2017). She was awarded the Neue Kunst Hamburg grant with Niclas Riepshoff (with whom she forms the performance duo CONNY) and a grant by the Danish Art Council in 2019, after being nominated for the Hamburger Arbeitsstipendium, the Hiscox Kunstpreis and the Schues Nachwuchsförderung all in 2018.

Her work will be shown at Atlanta Contemporary, USA in 2021 and she will have a solo show at Vestjyllands Kunstpavillon, DK in 2021 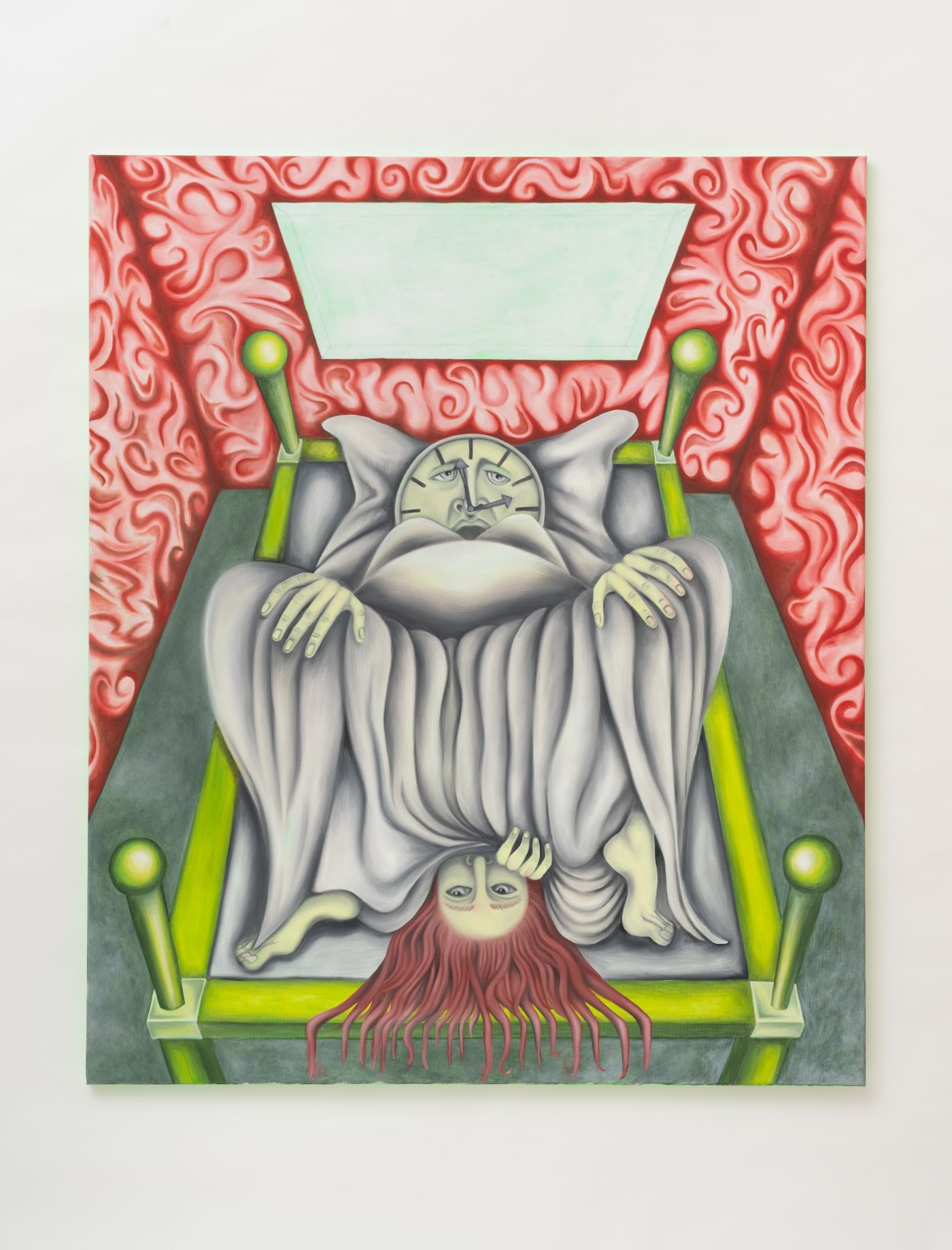 Self-Portrait as the Allegory of Painting, 2020
Oil and Acrylic on Canvas
120x100cm 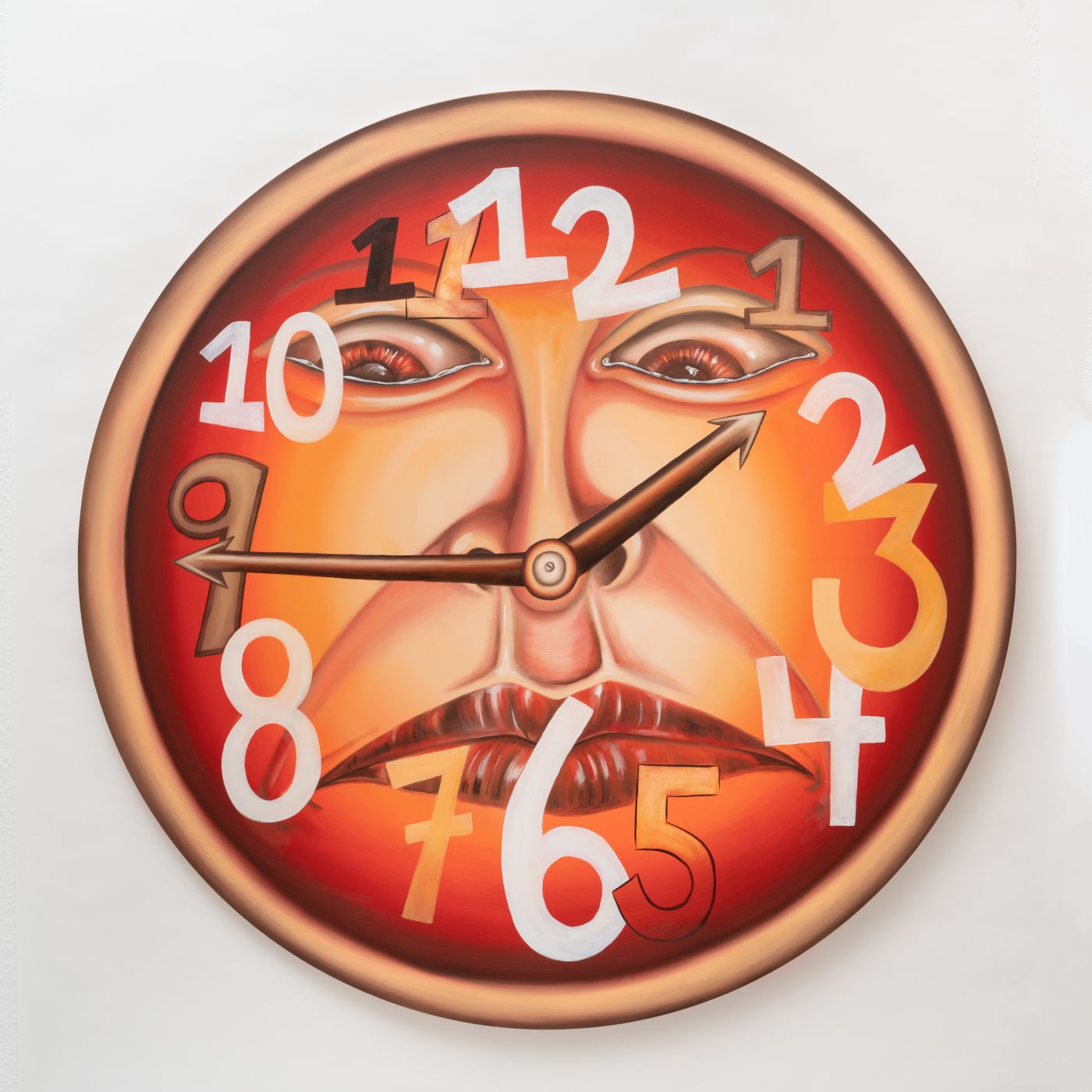 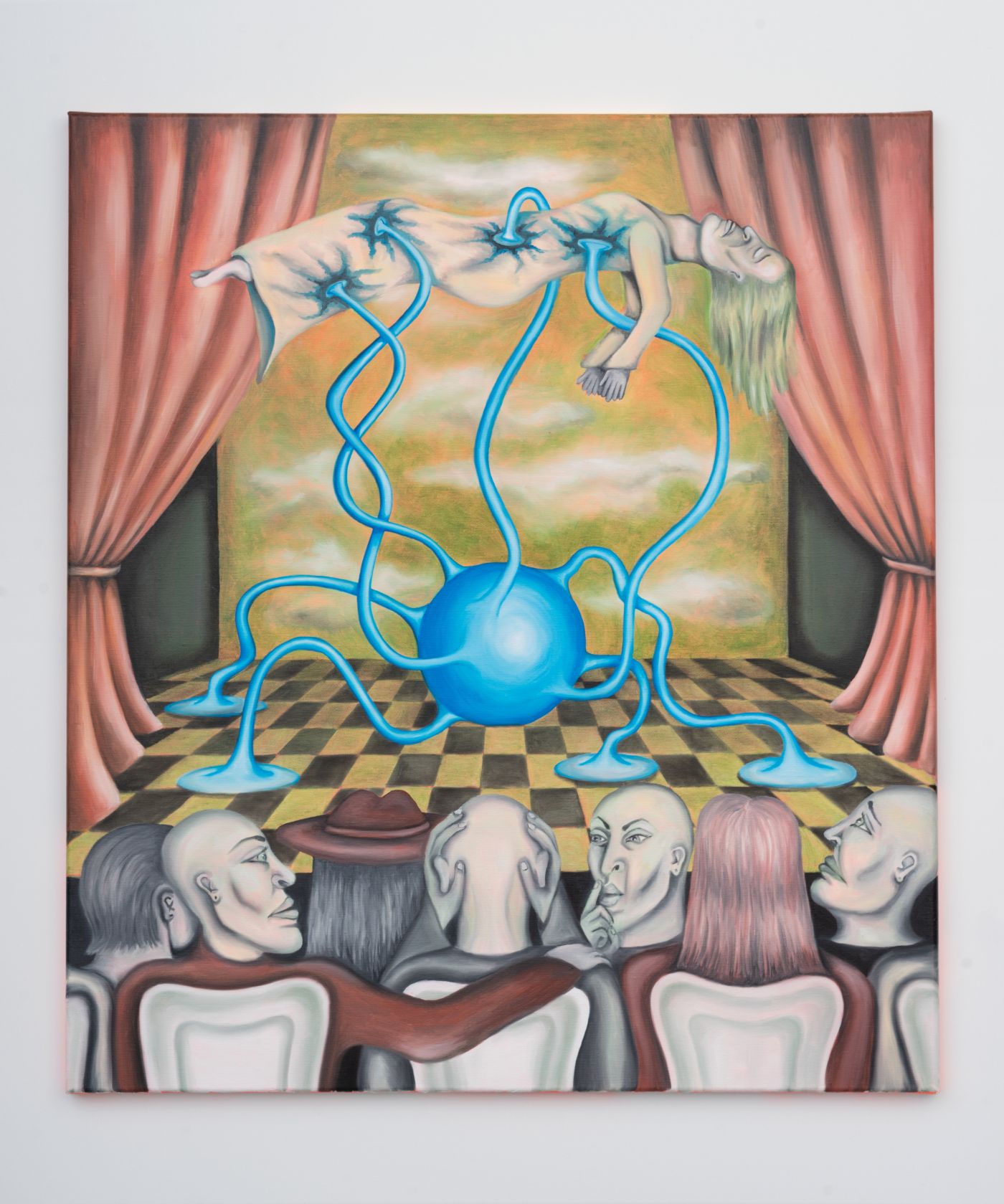 The lady is seemingly floating, 2020
Oil and Acrylic on Canvas
80x70 cm 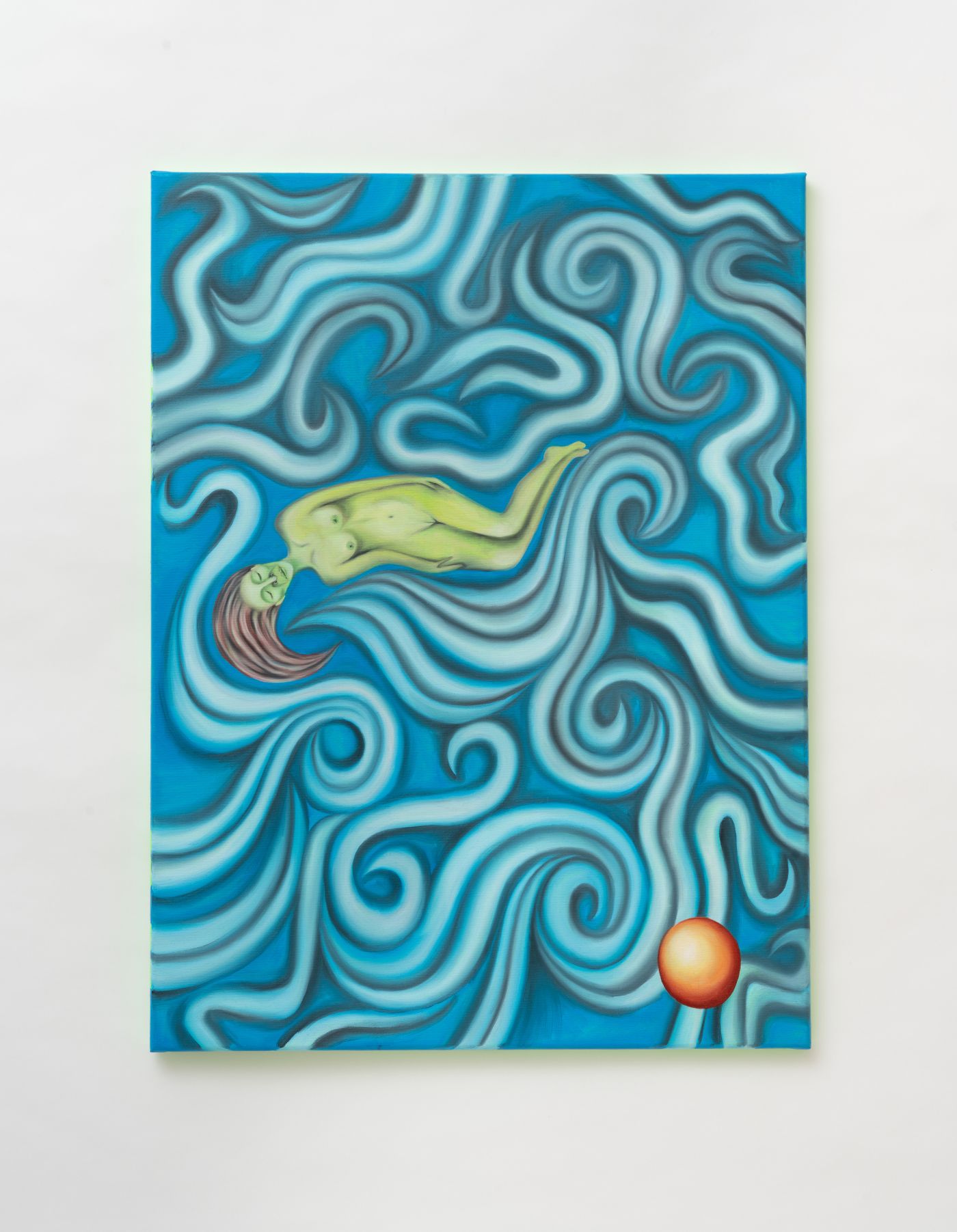 Tanja Nis-Hansen depicts hypnagogic states on the threshold that precedes the liquid, amniotic dissolution into dreams. Her world is a tumultuous one, full of arabesques, curls and upstrokes: the fire crackling in the hearth, the droplets falling from the sky, the magic trick of illusionist all appear to have been halted, numbed or frozen.

The perspective itself is swaying, the realm of the real dissolving, colors screaming without a sound. We are in limbo, in transit, and even the humanoid clocks and their smirking faces, a recurrent fixture in the artist’s latest body of works, obstinately p ...

A video documentation of parts of the performance ,Changing Batteries´ performed in 2018 at the Münchener Kammerspiele by CONNY (Tanja Nis-Hansen & Niclas Riepshoff)