Invocations and impressions of a place that is not a place

“Chance is the greatest novelist in the world: to be productive one has only to study it.” –Balzac

The series "Point No Point" (2020) comprises of five paintings. Three are landscapes, which hang unstretched and loosely depict a slice of rural coastline with what is discernible as a lighthouse on one side. The other two are hung, stretched, in portrait format, their forms echoing the structure and proportions of the coastline but flipped on its axis and left as a gravity-defying lattices of dripping pigment. Slipping between modes, Anne Fellner’s genre-fluid paintings draw us into an uncertain place between the act and the actual, where process, paint and perception all seem to play the role of protagonist.

Fellner paints on colourful synthetic fabric, often pulled out of the discard pile of the Berlin fabric store Hüco, and each painting is subtitled by the colour of the material, like ingredients in an alchemical experiment: rose, white, sage, gold, green. Using surplus fabric is one of the multiple ways she stages chance in her work, painting on what she happens to find, allowing the paint to find its own path across this unwieldy material. She then allows her own perception to find form in these shapes in a working process akin to falling and catching herself, stretching and un-stretching, both literally and metaphorically. She refers to the abstract works as “mindscapes”, though it is left unsaid whether they are depictions of impressions taken from her own mind or metaphysical impressions of the landscapes that hang alongside them. The two types of paintings, marked with streaks of paint like ley-lines, pull against each other, feeling neither wholly figurative nor wholly abstract, like Zeno’s paradox of the arrow that is neither moving to where it is nor to where it is not.

The origins of this series are in another abstract work, titled Point No Point (Summary) Fellner produced two “Point No Point” works in 2019 for an exhibition at Liszt in Berlin. The first was POINT NO POINT (SUMMARY), in which the lighthouse appeared, and the other was IN THE LIGHTHOUSE (POINT NO POINT). “I made them around the same time, but the idea they might be set in the same place came later, when I was writing the press release/poem and hanging the show,” she says (2019). When contemplating this earlier painting, Fellner discerned within it a shape that recalled, for her, a lighthouse in Washington State close to where she grew up called Point No Point. Here, it is as if she treated the abstract painting as a conduit for scrying, that age-old occult practice where one gazes hypnotically into a medium until a vision appears, oftentimes of something one longs for; she turned her own cognitive bias into a perceptual paintbox, mining her memory for psychic imprints that could be reverse engineered into paintings. This vision then inspired her to search for the lighthouse that had seemingly come searching for her: Landlocked in Berlin during the pandemic, she found herself longing for a place that she could not physically travel to. Instead, she discovered a webcam trained on the spot 24-hours a day and decided to make a series of landscape paintings based on watching its feed in real time, therefore referring to the works as “virtual plein-air” paintings.

Through both the act and the result of the action, the “Point No Point” paintings capture and constrain chance in a way that exposes our inclination to read it for intention. As the late great writer Iris Murdoch noted, “We are creatures who make pictures of ourselves and then come to resemble those pictures.” We read happenstance for providence, and there is a psychosomatic inference in our search for signs This was the subject of Fellner’s exhibition "Signs and Portents" at Damien & The Love Guru in 2020 whereby perception precedes reality. These paintings confer that uncanny feeling of an aftermath that precedes its own portent, of finding familiar a place you have never been.

It is the case that all painters have to confront their relationship with the history of painting and its attendant technical glossary, and it takes a brave one to refer so explicitly to Impressionism, a style that has been overtaken by its own endless proliferation of saccharine merchandise. But the Impressionists were also in search of their own strand of truth through process, and to paint en plein air was one of their primary methods of doing so. One of Fellner’s references for “Point No Point” was Claude Monet’s Rouen Cathedral series. In this alignment of her work with a giant of Western art history, Monet is recast as a fellow psycho-geographer attempting to capture the ineffable essence of a place.

Though these days we also have the added expanse of cyberspace to contend with, and it is a very contemporary form of displacement to find oneself searching for spatial orientation in the virtual realm, suspended in a liminal online dimension that is a place but not a place, like a point that is not a point. Webcams are portals, enchanted pools that allow you to gaze upon vistas where you, physically, are not. Like so many of contemporary technologies, they were imagined long before they were invented, and in Fellner’s hands the grainy webcam image resonates with its preternatural folktale beginnings. The webcam also provides a neat foil to that elsewhere of a painting; be it the refined pigmented space of an abstraction or the horizon of a landscape, a painting displaces space with own fictive dimension.

These paintings are, above all, depictions of a place – a place that is simultaneously in the artist’s memory and down the end of a webcam and is rendered both as a romantic landscape and a metaphysical emanation. Stéphane Mallarmé, an Impressionist poet, spoke about wanting his poems to paint not the thing itself but the effect it produces. Perhaps Fellner’s displaced impressionism is closer to this metaphorical notion of painting as an act of invocation rather than evocation. Like the endless rotation of the lighthouse’s beam or the mantric refrain “point no point”, we are pulled into the gyre of these works, left to recognise there is an unmappable Point No Point in each of us, an inner elsewhere based on a distant somewhere. 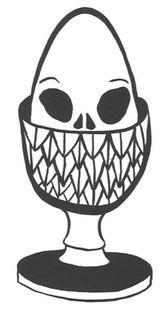 Leila Peacock (b. 1981, UK, based in Zurich) is an artist and essayist. Her writing has been published by The Bulletin of the Serving Library, The White Review, DEARS, Spike, émergent magazine and Kunsthalle Zürich. She also produces experimental text collaborations for artist books and exhibitions (Sophie Nys, Jeremy Ayer, Krone Courone, Hamlet). She is the founder of the pilot program WAVES, a new post-graduate studio seminar in Zurich, beginning in 2022.