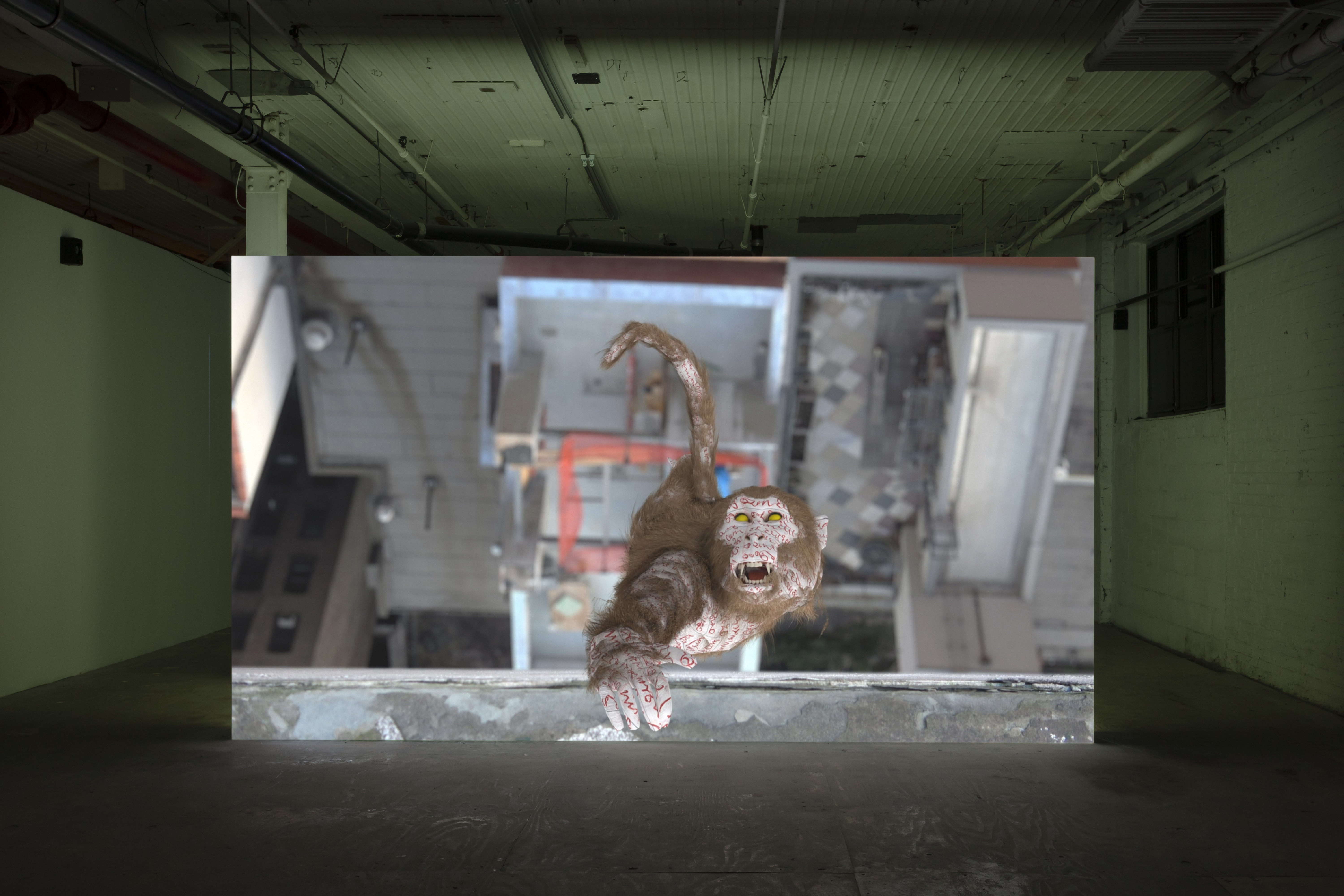 What am I looking at? I regularly return to such a reliable question when watching Vijay Masharani’s work. This isn’t because I don’t recognise the basic components of subject matter in each of his video works – they’re usually quite clear – but, rather, because such a question extends beyond describing the standard role of audience spectatorship; instead, the anti-cinematic approach Masharani employs in his austere videos stages scenery as if the camera itself is asking this very question, examining objects and situations slowly, expectant of some answer. In this equation, any audience asking this question finds themselves merely along for the ride as the camera’s eye asks its own questionsin real time. These images consist of defamiliarized quotidian scenes that all appear to be charged in some way, even if just for their inclusion: a walkthrough of an aquarium shop in Queens, New York, before encountering a racialised threat posted by the register (Good Attack, 2021); a CGI monkey clinging for its life on the side of a building (Mourning In Advance, 2021–22); a technical image of infrared-illuminated airborne droplets measured against a dark backdrop (Command | Plea, 2021); or an inverted image of an ornamentally lit motorboat whose reflection dances like a mirage on the surface of a nocturnal body of water (Nervosism, stutter, b-b-buh-bye, 2021).

When it comes to Masharani’s camera, its vantage point oscillates between extremes: the lens operates as a surveillant, distant object, observing without connection to its subjects, or as an anxious figure seeing the world through the hyper wide-angle of athletic vlogs – a lens that leaves behind the muted VHS fisheye of 90s skate videos – through which nearly everything (except, at times, the uneasy eyes of its wearer) recedes into the distance. Within such varied shots, there’s a sense that these vignettes are framed not as scenes to be interpreted, but as formal arrangements in which signs and shadows are encountered in deadpan. At certain moments, they’re simultaneously encountered as sonic arrangements in which words repeat until any eavesdropping individual might reach a strange sort of semantic satiation, one whose meaninglessness reveals itself not as “nothingness” but, rather, as the paradigmatic aesthetics of some absent force. In fact, Masharani describes this blankness more explicitly, as an index of the larger structure of power standing behind fraught gestures and images, something that ends up describing white supremacy’s passive encoding in digital media.

In Masharani’s short video Command | Plea, an appropriated (and manipulated) segment of technical footage appears to show bright specks illuminated, floating against a dark, natural backdrop. Audio plays through of the group preparing to run the experiment until, finally, one voice repeats the word stay, seemingly in order to measure the airborne droplets produced by one particular phonetic structure of speaking (and clearly produced during early COVID transmissibility studies). The resulting work feels like theatre of sorts, as the deadpan performance of the word stay flickers between the gestalt of a command and a plea before becoming nothing more than sounds and specks: ssstaii. sssstei. The experiment completes, having successfully shown the density of airborne droplets in front of a speaker’s mouth, and we hear two more minutes of chatter before the film loops.

This piece in particular might help recontextualise all of Masharani’s video work into the potential format of the expanded technical image. I’m interested in what that format offers the idea of an oft-validated phenomenology of paranoia. I think about Harun Farocki’s work in mapping one lineage of early optical measurement techniques from surveyal modes developed by Albrecht Meydenbauer in the mid-19th century (skipping Aimé Laussedat’s 1849 photographic/topographic map compilation techniques) up through the proliferation (to the point of oversaturation and neglected data) of WWII reconnaissance photography, and how, in some ways, it revealed that the stress point of technical images are that such visuals made to carry dry, quantifiable data might carry qualitative, emotion-evoking subject matter as well. The simple repetition of the word “stay” is meant to mean nothing for the experiment, and yet all an audience can hear is the dramatic climax of some imagined three-act play: stay. stay.

In Masharani’s work Good Attack, we might think about the technical image under less literal circumstances: the deadpan eye explores the various tanks of a tightly arranged aquarium store, perhaps a slightly stoned gaze that lingers a bit long on the colours and textures, somewhat concretely tracking the availability of fish within the store and informally marking their locations. This exploration continues silently, interrupted only by the foley effect of a chime synced with the encounter of a sign behind the shop counter proclaiming DIE TERRORIST SCUM. With this discovery, some sort of force begins to find near anagrams of this vague, plausibly deniable signal to every customer that visits, magically shifting the words as a laundering, absurd gesture: MOISTURISED, MERETRICIOUS, ROTISSERIE. As the camera asks what am I looking at, the logic of its inspection similarly assumes this deconstructed format of the deadpan, technical image, but applies it, instead, towards calculating something difficult to fathom as a force that could possibly be measured.

Whereas such a project could devolve into a rote, didactic impulse, the formal play that emerges in Masharani’s work is one of playful aloofness. Footage seemingly shaped by accessible digital compositing tools that impose an air of magical surrealism upon otherwise unassuming spaces find themselves bookended by instances in which, plainly, nothing happens. Punctuated again, the work navigates a different sort of surrealism, one that reveals itself through un-manipulated magical scenery discovered by the prevalent lay cinematography of the HD video camera.

In such a dynamic, metonymy and metaphor find themselves in tension with one another: it’s difficult to tell if an audience is viewing the toenail of the monster or, instead, a relational dynamic that concisely illustrates the ontology of that monster. In truth, each film’s depictive tactics operate through a quantum state of sorts, where a mutual immanence finds each of those modalities within the other. Somehow, what emerges might operate as that phenomenology of paranoia, a subjectivity shaped by its mandatory, persistent scan of its surroundings – one that finds how potentiality charges otherwise inert scenes.

I recall a piece of Benjamin Noys's writing from 2010 in which he’s thinking through abstractions, depictions, and power in a similar way. Referencing an essay Louis Althusser wrote on the painter Leonardo Cremonini in 1966, he notes that Cremonini “is not an abstract painter but a painter of abstraction”, a distinction marked by the ways that the work does not simply paint living conditions, social relations, or capital itself – which is unrepresentable – but that he paints “‘the determinate absence which governs [us]’”. Despite the difference in medium, Masharani’s work feels kindred here, threading together footage until it collapses into abstract formal relations, depicting real subjects as mere aesthetic secretions of the thing that is off-screen, or actually, that is un-screenable. 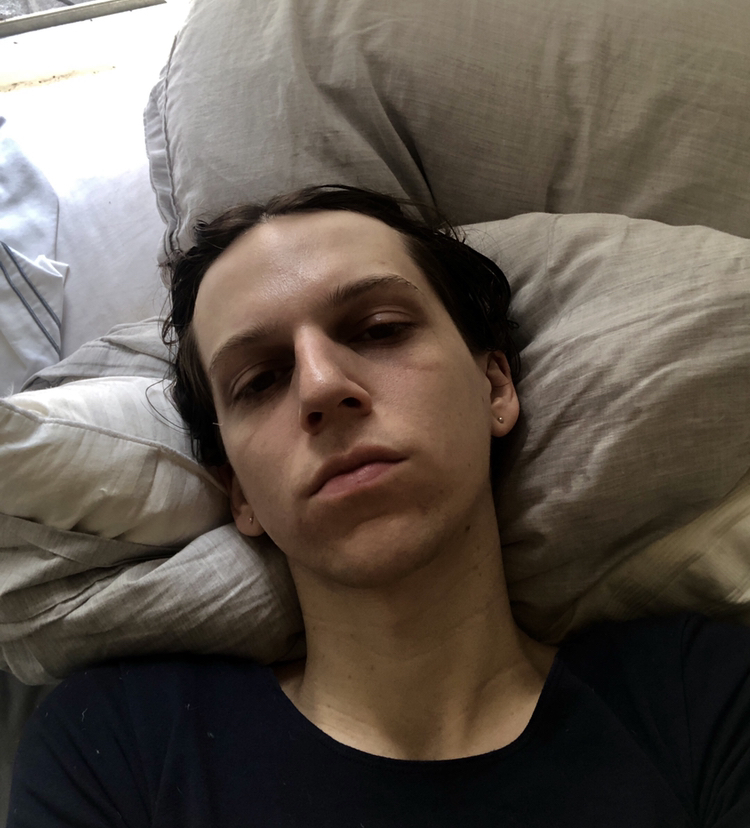 Coco Klockner is an artist and writer living in Brooklyn, New York. She is the author of the novella K-Y (Genderfail Press, 2019).