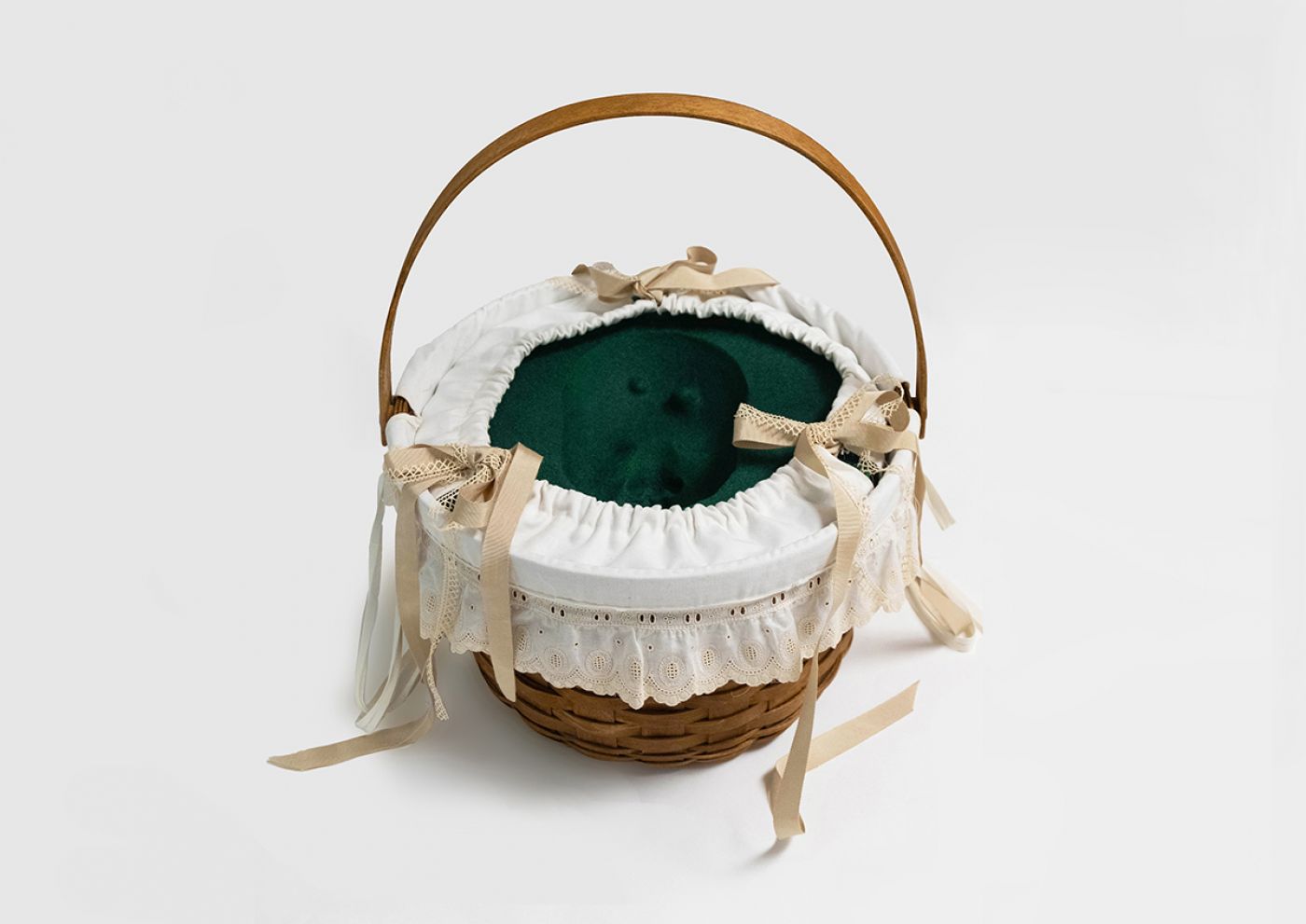 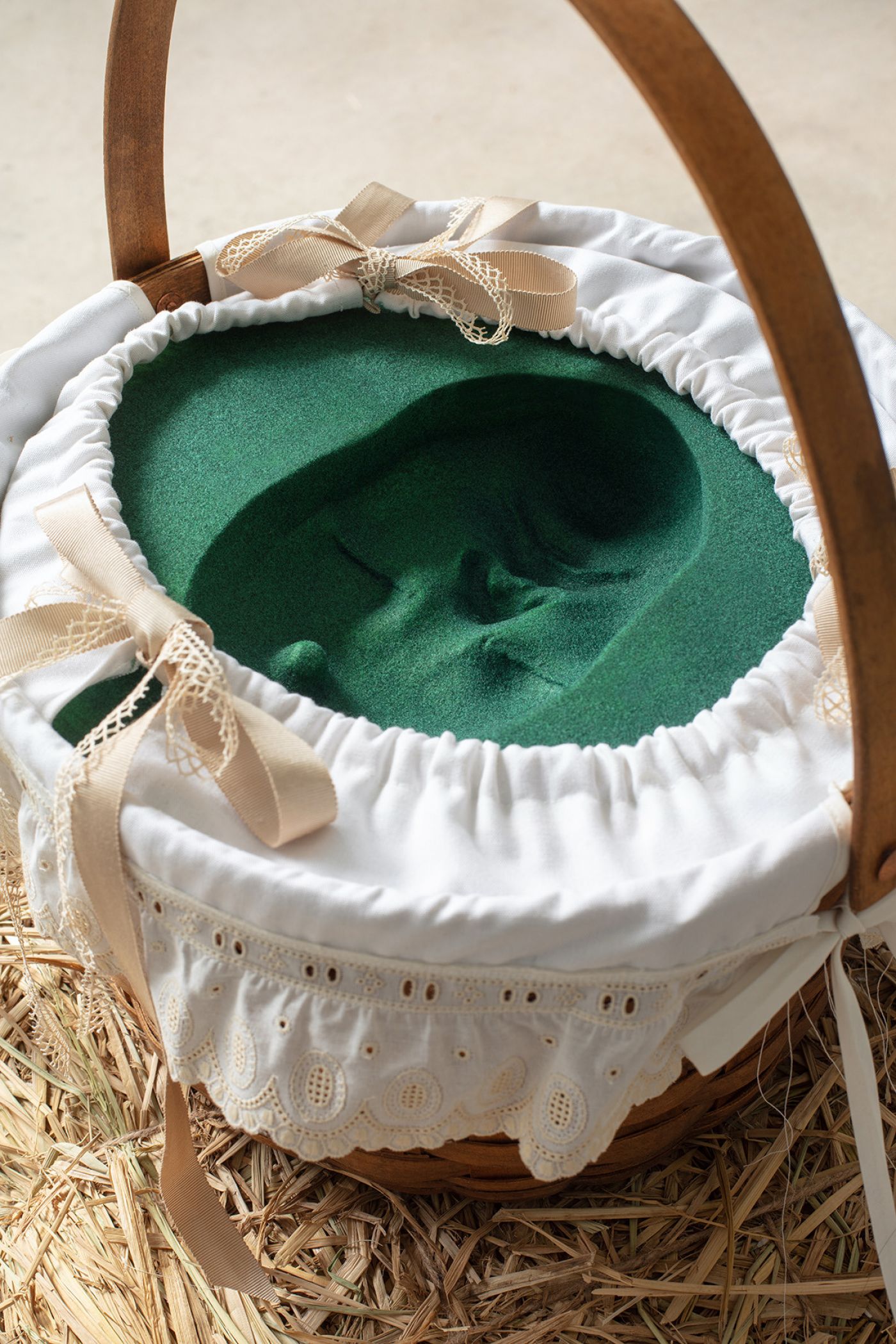 Inheriting the artist’s interest in the carnivalesque as a form of the macabre, Shen’s works are both enticing and horrifying. Seemingly familiar objects are discreetly transformed into sugar-coated pitfalls through the restoration of materiality as their original functionality is mischievously disarmed and twisted: a game with no way to win and no prize to gain, a container that contains its owner, or a murderous tool of labor. Myne Name Is Lubbert Das (2021) depicts a delicately decorated Longaberger table basket. Lubbert Das was a comical character in Dutch literature who was depicted in ... 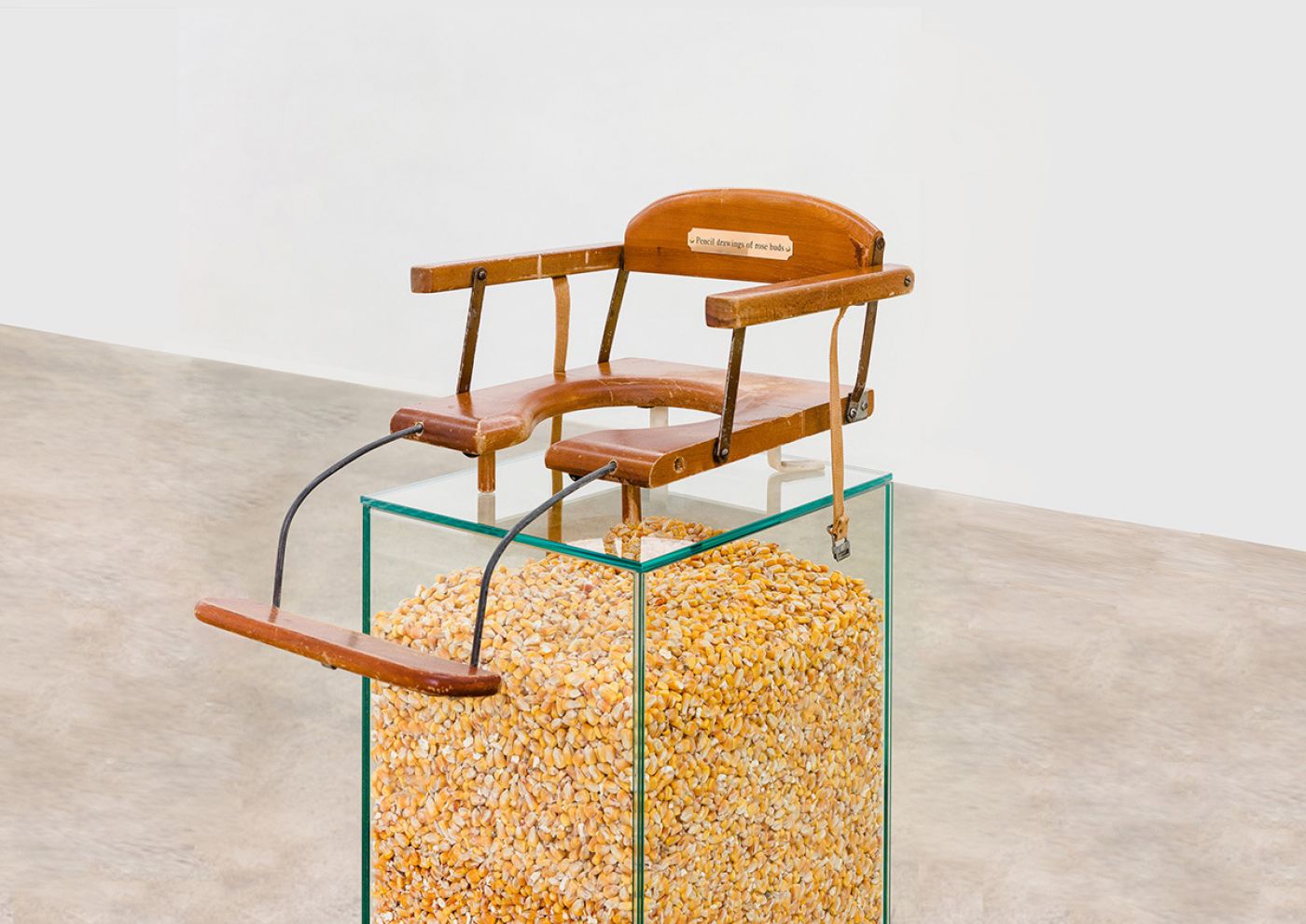 In Pencil drawings of rose buds (2019), a children’s training potty is situated on a transparent plinth filled with corns. The formality of the training potty resonants with that of a toy sled, which is appropriated from the “rosebud” brand sled in the movie, Citizen Kane as a famously uttered symbol of the mysterious and the unsolved. Rosebud being a common word, yet has come to culturally signify a password to gaining knowledge, closure, and resolution. And the poetic characteristic of the title “Pencil drawings of rose buds” suggests a degree of impermanence, that leaves the written sentence open to be erased and words replaced. By evading the common logic of language, the artist creates voids and abyss of linguistic vertigo that are physically manifested by the objects: toilet device and the plinth it sits, all being agents of the void, extend further than the dreadful emptiness beyond, but with emancipatory potential of immurement, the idea of being trapped in such a way that one can no longer distinguish oneself from what contains them. Whereas the corn occupying the plinth implies a terrestrial torture of the hell, the threat of grain entrapment that is frequently referenced in science fiction and horror movies, transforming the training potty from disciplinary device to torture machine and blurring the boundary between self-discipline and self-torture. 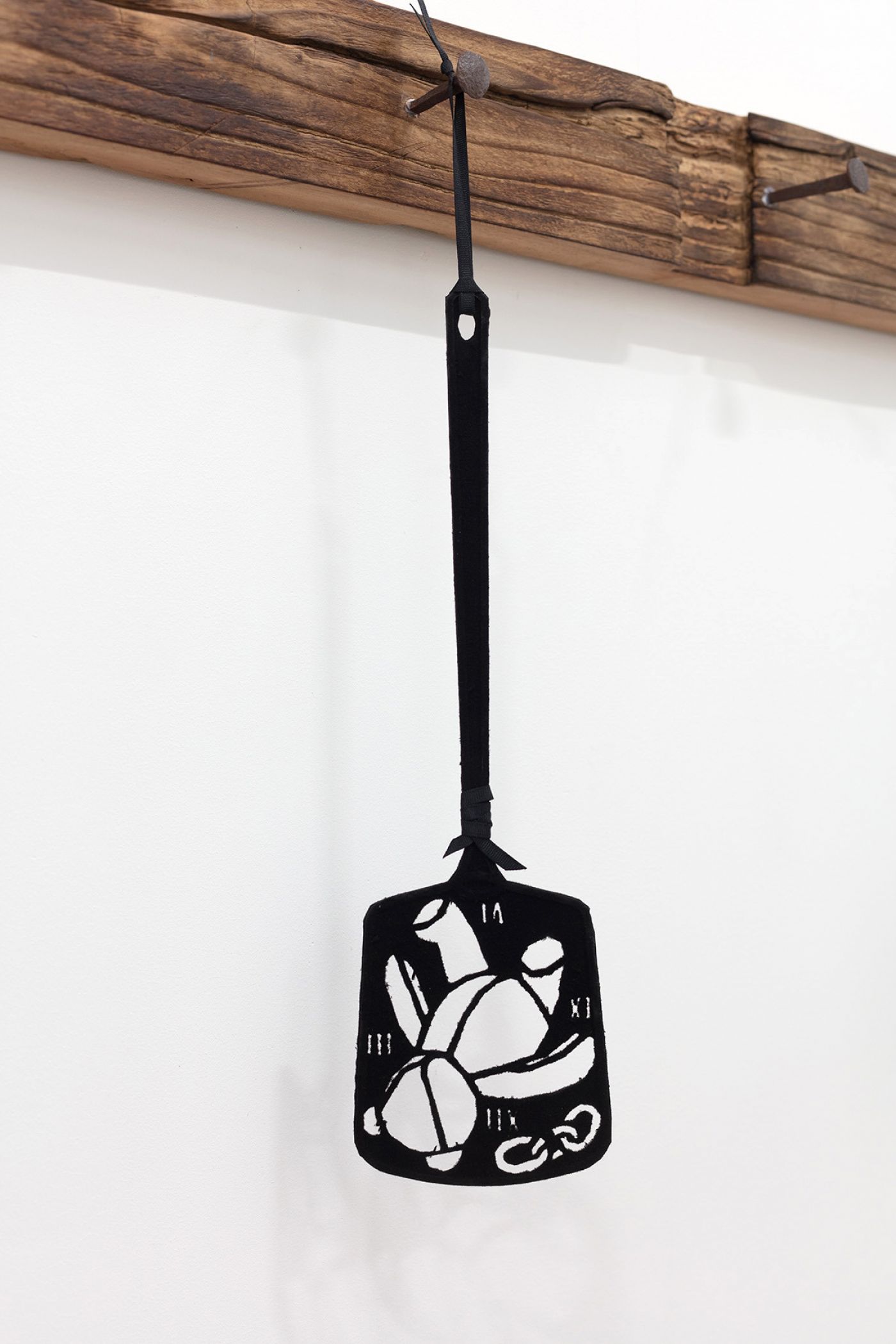 Sydney Shen, My Heart Burns and the Fire Is Sweet, 2017 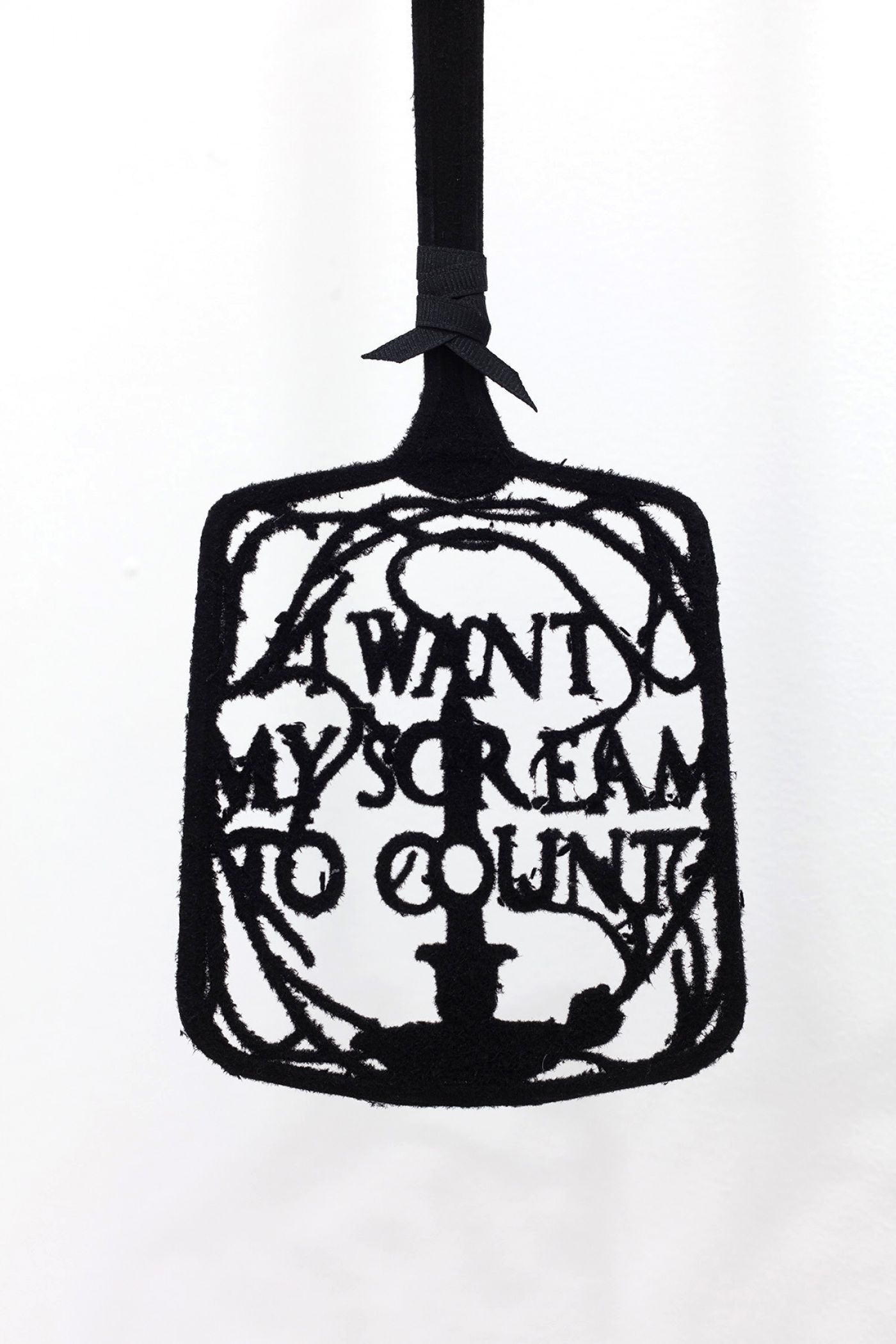 Sydney Shen, My Heart Burns and the Fire Is Sweet, 2017

Besides from its original functionality designed to eliminate flies, a fly-swatter could be employed as an execution prop for self-punishment. Replacing the gridded structure with stained-glass like patterns, the artist draws on imagery and text sourced from Catholic prayer, Renaissance madrigals, and online Halloween store. Crudelissima Doglia (2017), in particular, could be traced back to Carlo Gesualdo, an Italian prince infamous for his melancholic music as well as his sadomasochistic brutality. He hired servants to regularly beat him—some say it was to quell inner demons. Medicinali ... 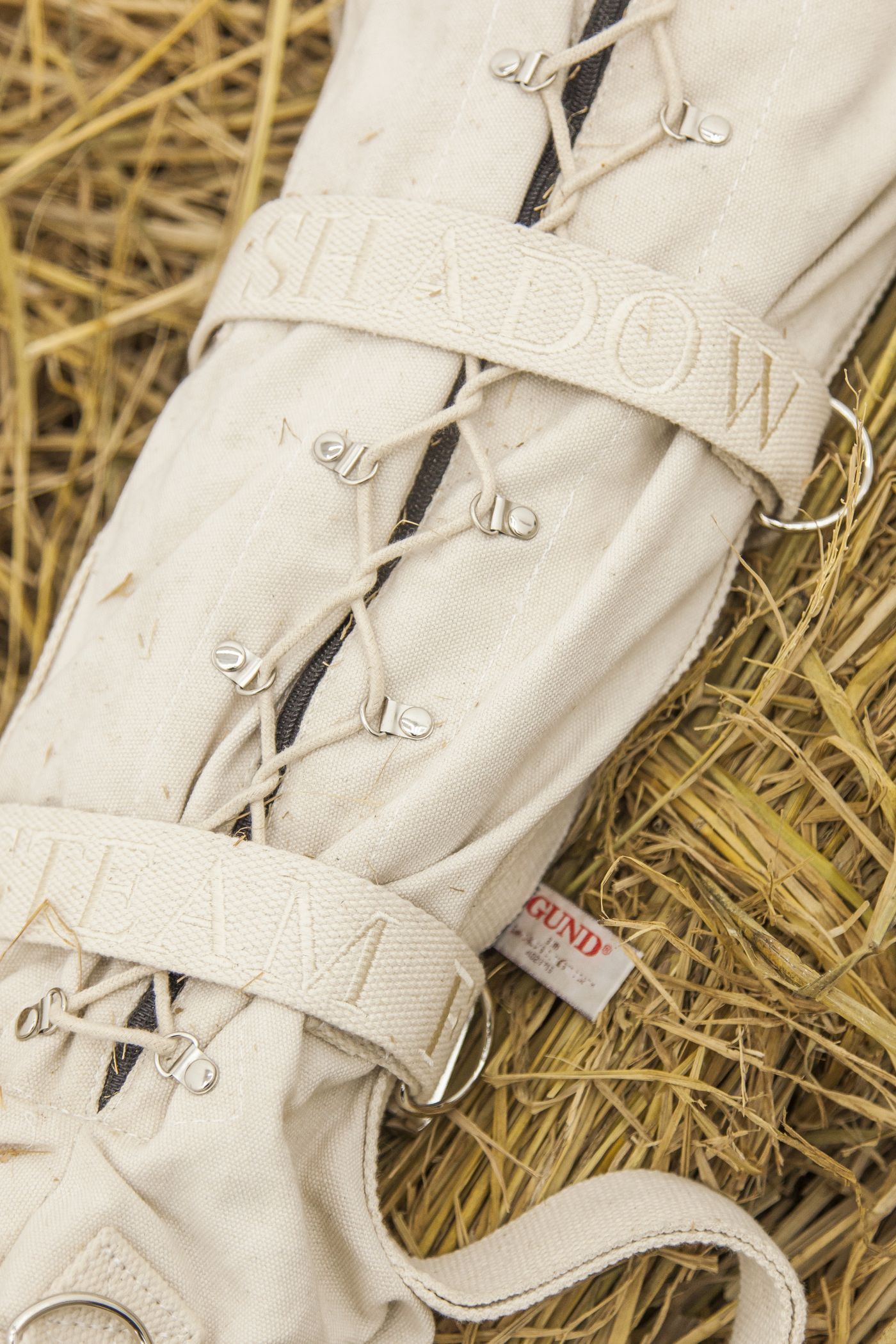 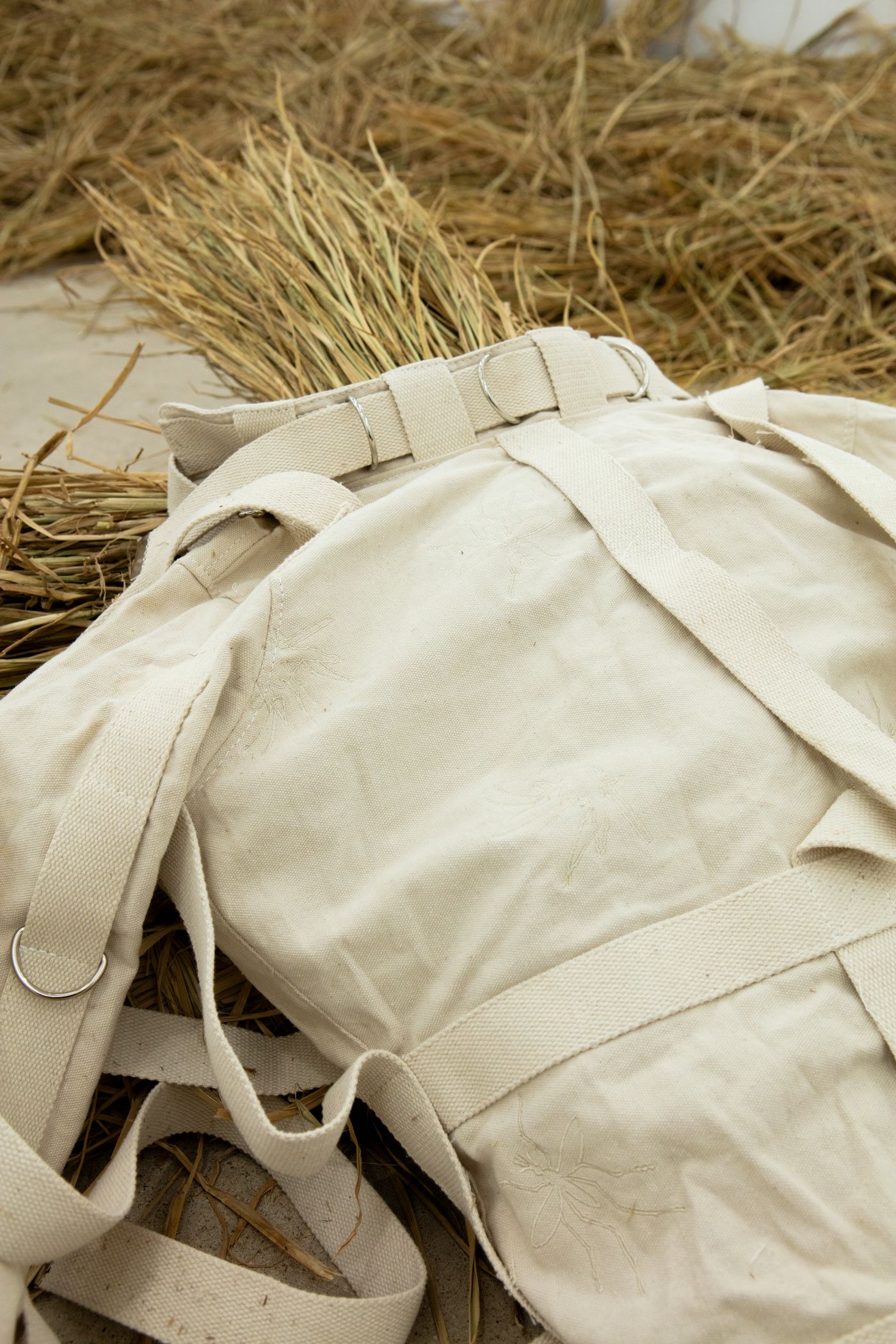 Examining the history of literature and cinema, the image of scarecrow lies between childish cuteness and passive-aggressive violence, fitting both toward peaceful and idealistic idyllic scenery or the symbol of horror with its semi- human characteristic. Inheriting her ongoing interest of the paradox between the lovable and the dread, Sydney Shen deconstructs the idea of scarecrow and reinforces it with delicately embroidered strait-jackets, setting up a fairy tale like environment with manic twists. Building upon that, Shen takes a deep look into the discussion between divinity and humanity, which can be traced back to the scarecrow for its duality in representation of both the sublime incarnation of Crucifixion and mortal incapability. Combining with the classic Chinese tale of Lady White Snake, which is reflected on the embossed matchbooks of the installation, Shen is fascinated with the idea of human’s desire of apotheosis and the immortal’s willing of humanization. 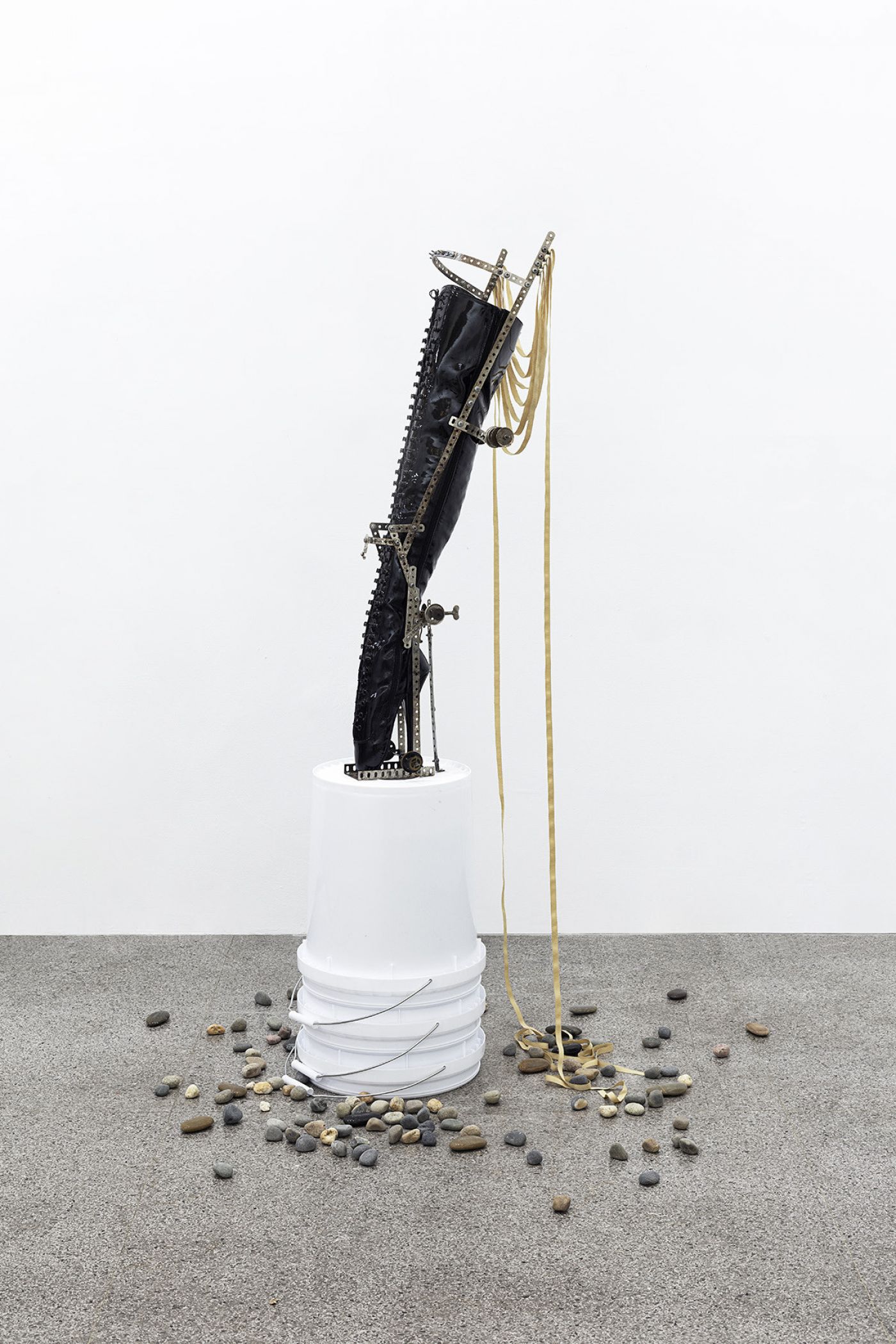 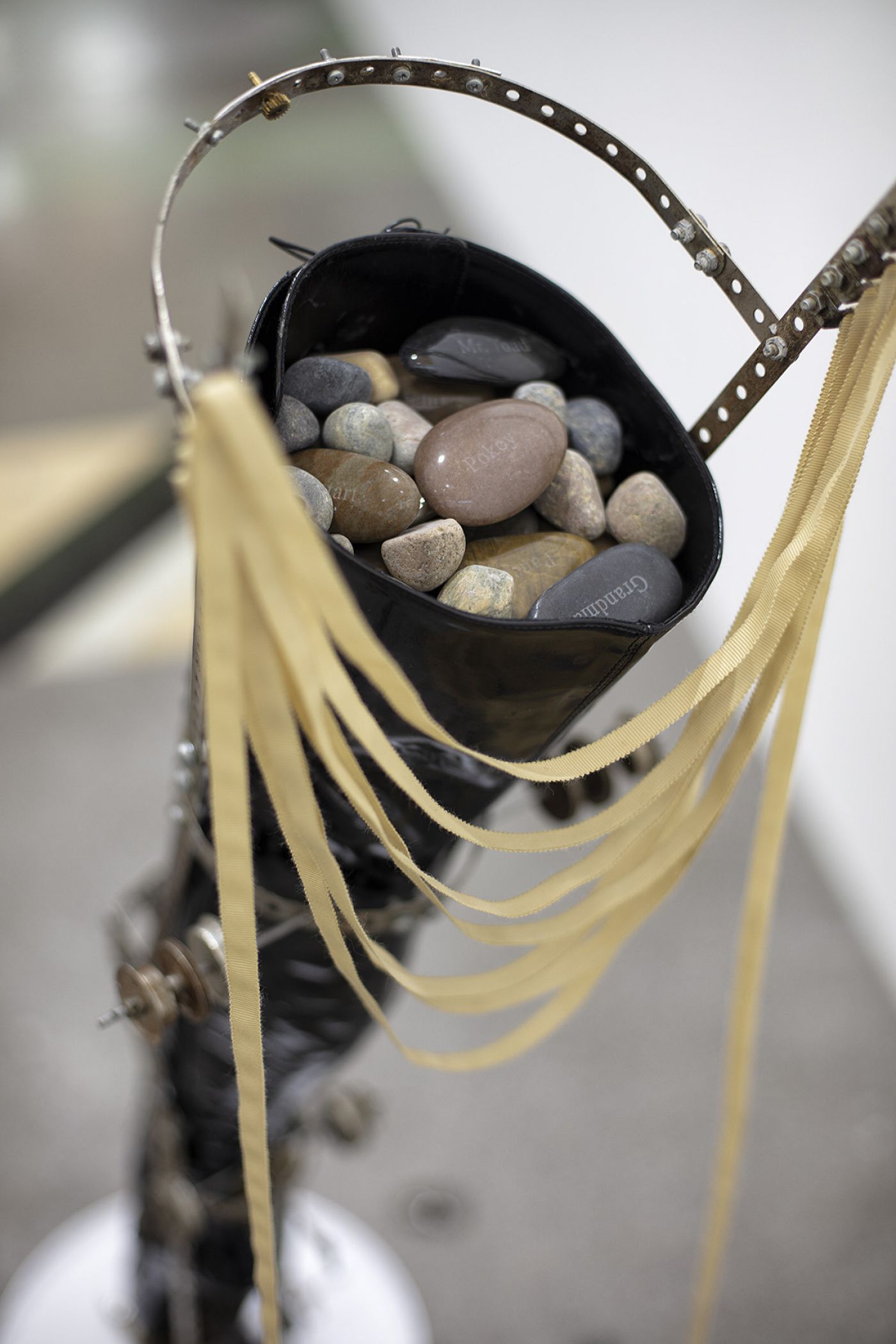 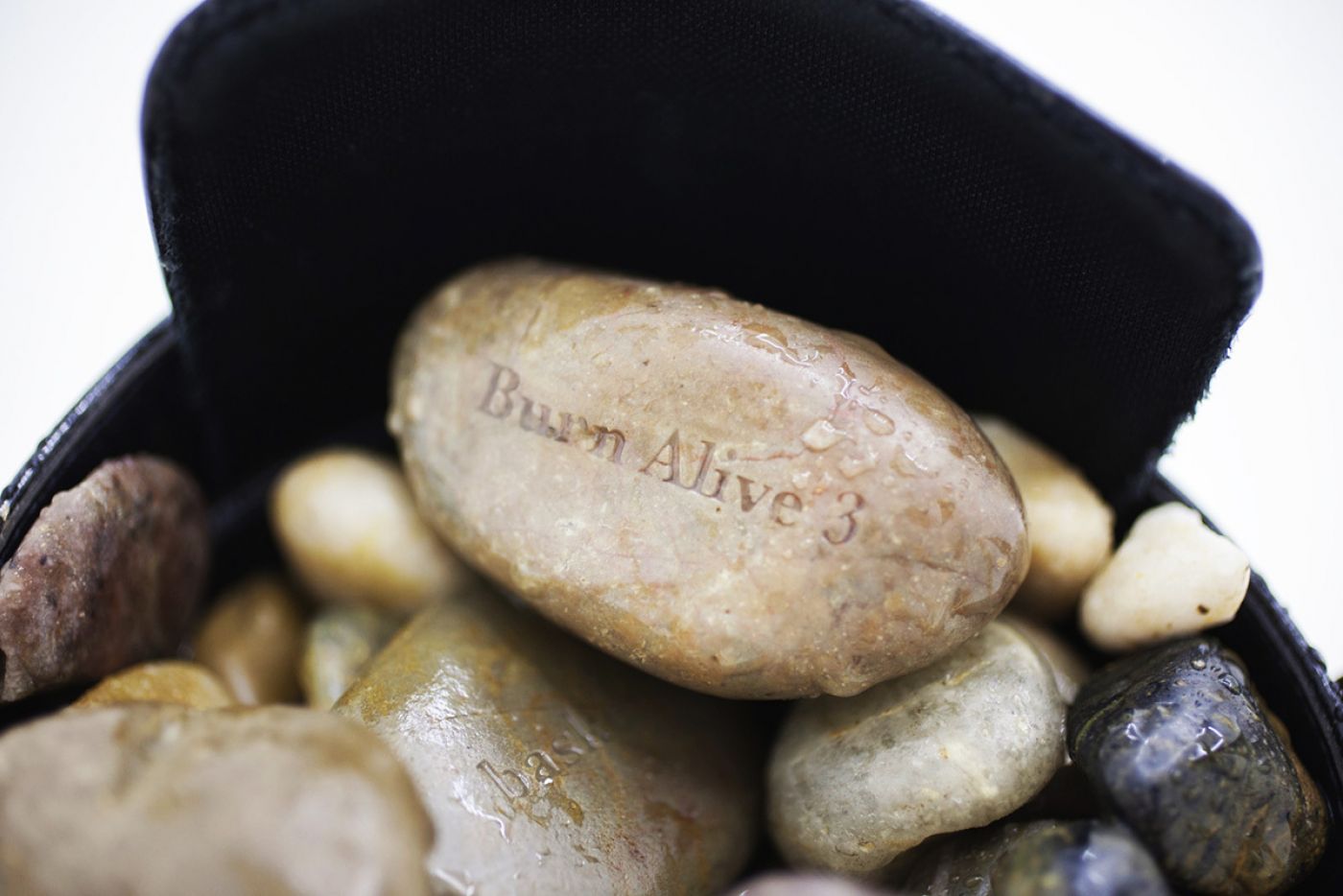 In Thirst Is the Mother of Corvid Ingenuity (cf. Rom. Anglicus #107) (2020), Sydney Shen borrows the title from the classic children’s book, The Crow and the Pitcher of Aesop’s Fables, narrating the story of a half-dead, thirst-driven crow using pebbles to reach the water in a high and narrow pitcher. Responding to the original story structure, Shen employs the form of a punitive boot, functioning not only as the subsititution for the water container but also the symbol of extreme restraint of the body, Manipulating the fetish accessory with its contradictory quality of both pleasur ... 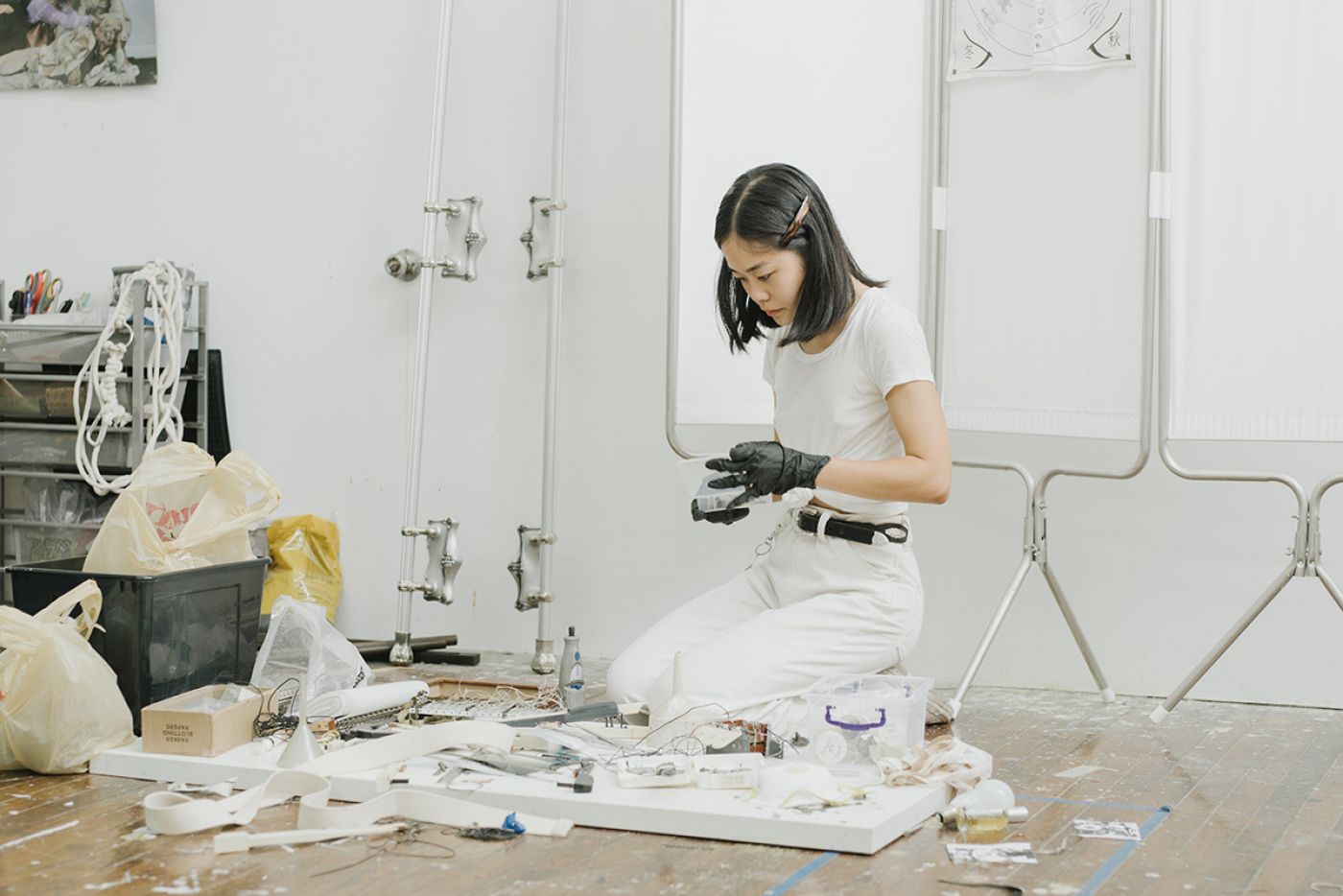 Sydney Shen (b. 1989, Woodbridge) lives and works in New York. She completed her BFA at The Cooper Union for the Advancement of Science and Art, New York in 2011. Shen uses sculptures and installations to create an atmosphere of wretched apprehension, examining the limitation of mentality through the extremity of the physical body. Exploring through various sources from historical and contemporary art history, including but not limited to medieval excruciation, supernatural horror fiction, and Internet subcultures, Shen frankensteins organic and fabricated materials such as Chinese and Western medica ...